CHARLOTTETOWN, PE – As part of the Quebec Major Junior Hockey League’s 50th-anniversary celebrations this season, the league will be honouring its half-century in several ways. Among them will be a list of the Top 50 players in QMJHL history, based solely on their contributions during their junior years. They stand out among 9511 players who played in the QMJHL over the past 50 years. Yours truly was part of the selection committee that deliberated over these tough choices.

In this third segment, we will be presenting the ten players from rank 30 through 21. Eight of these players have already been inducted into the QMJHL Hall of Fame and, also in this segment, is the highest-ranked goalie on this list of the Top 50 players in league history.

Defenceman Patrice Brisebois enjoyed a brilliant career over his four seasons in the QMJHL before going on to play over 1,000 games in the NHL. In four seasons (three in Laval and one in Drummondville) “Breezer” amassed 258 points in 208 games, winning two President Cups with the Titan, both in 1989 and 1990, and taking part in three Memorial Cup tournaments. Following his only season with the Voltigeurs, Brisebois was named the top blueliner in Canadian Junior hockey. The would-be second-round pick of the Canadiens in 1989 also won a pair of gold medals with Team Canada at the IIHF World Junior Hockey Championship in 1990 and 1991. Brisebois was inducted into the QMJHL Hall of Fame in 2014.

At No. 29 is one of only four players in QMJHL history to win back-to-back league scoring titles: Jean-François Sauvé. A fourth-round pick by the Trois-Rivieres Draveurs in 1977, the Laval native posted two phenomenal seasons of 176 points and 187 points under the watchful eye of head coach Michel Bergeron in the late 1970s. During the 1979 playoffs, Sauvé exploded for 38 points in 13 games to help lead the Draveurs to a President Cup triumph. Sauvé was also named the league’s most gentlemanly player in each of his two junior seasons and is one of only eight players to ever lead both the Midget AAA League and the QMJHL in points. Sauvé was inducted in the QMJHL Hall of Fame in 2003.

Like Jean-Francois Sauvé, Guy Rouleau also twice won the Jean Beliveau Trophy as the QMJHL’s leading point-getter. The pint-sized forward had magic hands that paved the way for three 60-plus goal seasons and one 100-plus assist campaign. During the 1986 playoffs, alongside linemate Luc Robitaille, Rouleau piled up 43 points in 15 games to lead the Hull Olympiques to a President Cup Championship. Then at the Memorial Cup, Rouleau had two six-point games, becoming the only player to ever manage the feat in the tournament’s history. Unfortunately, Rouleau passed away in December 2008 but did see his jersey retired by the Olympiques in 1999 and he was inducted into the QMJHL Hall of Fame in 2001.

Forward Luc Robitaille made his mark while playing with the Hull Olympiques during the mid-80s. A product of the Midget AAA Bourassa Angevins, Robitaille played three seasons under Pat Burns in Hull, amassing 424 points in 197 games. In 1985-86, “Lucky Luke” racked up 191 points to tie linemate Guy Rouleau for the League’s scoring title. Despite those eye-popping numbers, Robitaille went on to be a mere 9th round pick of the Los Angeles Kings at the NHL Draft before going on to become one of the greatest left wingers in NHL history. The Olympiques retired his No. 15 in 1999, and he was inducted into the QMJHL Hall of Fame eight years later in 2007.

At No. 26 is the magician from Rouyn-Noranda, Pierre Turgeon, who in two years with the Granby Bisons posted 115 and 154-point seasons. He was the first overall pick at the 1985 QMJHL Draft and then the top pick in the 1987 NHL Draft, making him one of only five players to ever manage that feat, alongside Mario Lemieux, Alexandre Daigle, Sidney Crosby and Nathan Mackinnon. Turgeon is also one of only 12 players to have cracked the 100-point mark as a 16-year-old in the Q. While in juniors, the Bisons’ forward also led Team Quebec to a gold medal at the first-ever Esso Cup in 1986 which is an event now known as the World U17 Hockey Challenge. Turgeon would, of course, go on to score 500 NHL goals and get inducted into the QMJHL Hall of Fame in 2008.

No. 25 is where we find the top goalie on this list of the 50 greatest players in QMJHL history: Roberto Luongo. The goalie from St. Leonard, Quebec played four seasons, mostly in Val-d’Or and eventually in Acadie-Bathurst. The second overall pick in the 1995 QMJHL Draft, Luongo won 123 games (regular season and playoffs combined). He played for Team Canada at the 1998 and 1999 World Juniors and won the President Cup those same years, first with the Foreurs, then with the Titan. Tabbed as the top prospect coming out of the Q in 1996-97, Luongo has gone on to play over 1,000 games in the NHL after having been picked fourth overall by the New York Islanders at the 1997 NHL Draft.

At No. 24, defenceman Thomas Chabot made quite an impression on the selection committee. Despite his QMJHL tenure having been so recent, the Beauce native is one of the most solid rearguards to have played in the Q over the past half-century. Blessed with an exceptional skating stride, Chabot was named tournament MVP at the 2017 World Juniors after amassing 10 points in seven games, making him the only d-man in Q history to manage that feat. A second-round pick of the Saint John Sea Dogs in 2013, Chabot went on to register 153 points in 202 career regular-season games. After helping to lead the Sea Dogs to the President Cup in 2017, he earned the Guy Lafleur Trophy as playoff MVP and was then named as the top defenceman in Canadian junior hockey.

Stephan Lebeau dazzled fans of the Shawinigan Cataractes in the mid-80s. Lebeau remains the QMJHL’s second all-time point-getter with 580 points in 270 career games. Over the course of his four seasons in Shawinigan, he scored 69, 77 and 94 goals. In 1987-88, he scored 45 goals on the power play alon,e and he remains one of three players in league history to have scored eight goals in one game – a feat he managed in December 1986. A product of the Magog Cantonniers, he was selected by the Cataractes in the third round of the QMJHL Draft in 1984, saw his No. 27 retired by Shawinigan in 1998 and was inducted into the QMJHL Hall of Fame that same year.

Sitting at No. 22 is defenceman Pierre Sevigny, who in the 1970s enjoyed a brilliant four-season career in the QMJHL in both Chicoutimi and Quebec, but especially with the Trois-Rivières Draveurs. The Saguenay native may have stood only 5-foot-6, but he still registered 400 points in 309 games (combined regular season and playoffs). Sévigny still sits second all-time behind Danny Groulx for regular-season assists by a defenceman with 260. Sevigny was inducted into the QMJHL Hall of Fame in 2012.

At No. 21 is one of only three players in the 50-year history of the QMJHL to have strung together four consecutive 100-plus point seasons. Upon his arrival in the Q, Normand Dupont quickly etched his name into the League record book by posting a 125-point season as a 16-year-old, which was a record that stood until Sidney Crosby came on the scene in 2003-04. Over his four seasons with the Montreal Junior, Dupont amassed 568 points in 283 games which were a league record at the time, when he made his jump to the pros. That mark would stand for nine years. The Montreal native was inducted into the QMJHL Hall of Fame in April of 2000. 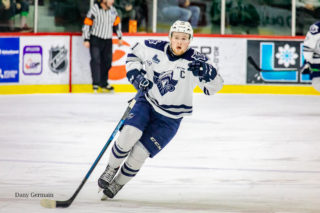 5:09
Rimouski Océanic alexis lafrenière
A look back at Lafrenière's first three seasons in the QMJHL
5 days ago 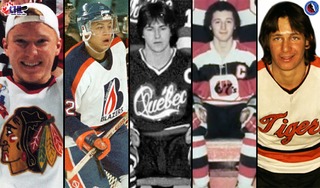