The rebirth of Alexandre Alain 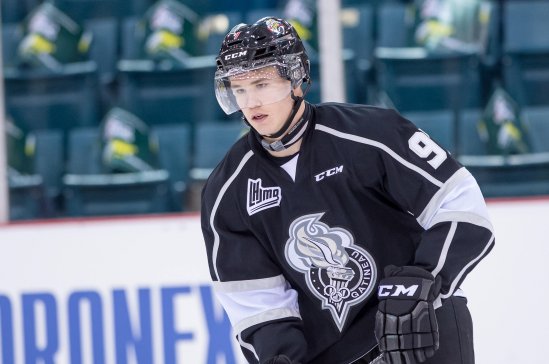 Alexandre Alain has been through a lot over the past year. At this time a year ago, he was playing for the Seminaire St-Francois Blizzard and had just been left off Team Quebec for the U-17 World Challenge. But things can change quickly in the world of hockey.

The first round pick of the Gatineau Olympiques in 2013 now finds himself on the top line of Benoit Groulx’s squad flanked by veteran Louick Marcotte and Russian Yakov Trenine. Oh and after 20 games this year, Alain is 10th among QMJHL rookies this year with 16 points. His standout play also earned him an invite to the SUBWAY Super Series as Canada takes on Russia.

“I was surprised when I heard the news, but I have been working hard since the start of the season. It’s an honour and a nice reward. I was disappointed to not be invited to the World Challenge last season, but I don’t even think about it anymore. I’ve put that all behind me.”

The centre from Quebec City believes that his head coach also being behind the bench for Team QMJHL influenced his selection to the team. “I’m sure he put in a good word for me. He’s shown confidence in me since the start of the season.”

If Alain didn’t end up cracking the Olympiques’ lineup as a 16-year-old last year, it was no accident. Groulx thought very highly of his top pick, but preferred having him continue his development in the Quebec Midget AAA ranks.

The reason was simple. Surgery to remove a benign tumor from Alain’s back had cost him his first QMJHL training camp. He had only returned to the ice and begun skating again one month prior to the Olympiques’ camp.

“I was getting over a big injury to my back and I wasn’t able to train much heading into camp last year. I felt like I was missing what I needed to be able to be at the same level as the rest of the team. I preferred returning home to Quebec City to get back in proper shape. Today my injury is completely healed and I was able to train hard all summer.”

For Groulx, the selection of Alain as part of the top Canadian players in the QMJHL was fully deserved.

“Alexandre Alain has been one of our best players since the start of the season and he fits the profile of a player who could eventually play for Canada at the World Juniors,” states Groulx

The QMJHL All-Star team in question will include a total of six 17-year-olds when they take part in two games against Russia, but Groulx is adamant that talent has no specific age.

“Our mission is to win this series while also showcasing the players that could represent Canada at the World Junior Hockey Championship. Not all the players will play in both games. Our 17-year-olds won’t all play at the same time.”

Back on the Olympiques’ front, they are a team that is young down the middle. Alexandre Alain and Alex Dostie centre the team’s top two lines despite both being 17. Meanwhile Jonathan Bourcier (18) and Pascal Laberge are also able to put points up on the board. What Groulx really likes about Alain is his ability to excel in all three zones.

That’s why in order to give their young talent a chance to shine; the Olympiques didn’t hesitate in dealing their captain Taylor Burke to the Quebec Remparts at the start of this season.

Now in his NHL draft year, Alain is beginning to flash the brilliance he was known for before his tough season as a 16-year-old in Midget AA last year when he didn’t play up to his potential.

This week he will get his first taste of the international stage. There will not be a shortage of scouts looking on in Bathurst on Tuesday and in Rimouski on Thursday. Alain really couldn’t ask for a more perfect opportunity to make an impression.

“This is perfect. I’ll get the chance to play with some very good players. It will be a great experience for me,”

The 6-foot, 168-pound forward will still have to be careful out there. Alain only returned to game action on Sunday after being out with a knee injury. He scored the only goal in 1-0 Olympiques win over the Sherbrooke Phoenix. That same injury also caused him to sit out four games in October.