The MasterCard Memorial Cup as seen by former Océanic players 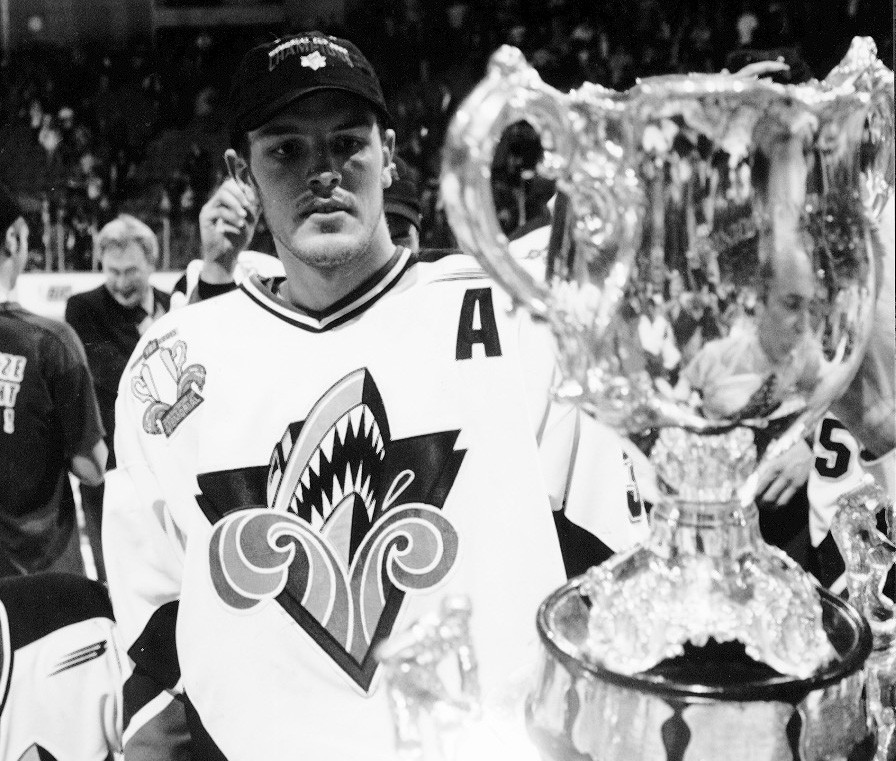 Beginning on May 22, the Rimouski Océanic will take part in their fourth MasterCard Memorial Cup tournament in franchise history. Even though the team had punched their ticket to the tournament once they reached the President’s Cup Final against the Quebec Remparts, Serge Beausoleil’s club still made it a point to emphatically enter the tournament as QMJHL champs following their thrilling double OT win in Game 7. Three of the four MasterCard Memorial Cup appearances made by the Oceanic have now come on QMJHL rinks as well.

The Océanic won it all in 2000, capping a year that saw them also earn the Jean-Rougeau Trophy and the President Cup. Then in 2005 and 2009, they were unable to again turn the trick.

The 1999-2000 squad remains the greatest team in the 20-year history of the franchise. That squad guided by Doris Labonté had no real weaknesses and proved exactly that as soon as the MasterCard Memorial Cup tournament got under way.

One by one the Kootenay Ice, Barrie Colts and Halifax Mooseheads all felt the wrath of the Océanic by mustering 15 goals. With then a free pass to the final, Rimouski made the most of it, downing the Barrie Colts 6-2.

With the momentum from their regular seasons carrying through to the playoffs, Brad Richards and Juraj Kolnik led the way with 10 points apiece. Defenceman Michel Périard then followed up his 100-point regular season with eight points.

“I can still remember how Barrie tried to throw off Brad Richards’ concentration, but we still won 7-2. And in the final, we beat them again. Some crazy stuff happened during our celebrations too,” recalled René Vydareny. “I remember Juraj Kolnik had fallen over the boards and Jacques Lariviere even fell with the MasterCard Memorial Cup! After that we had the long trip home. We stopped in a few places on the way back. There were a lot of people who wanted to celebrate with us.”

“In the first game, I remember being really nervous during the warmup. That’s when I realized the magnitude of the tournament. I don’t have one particular memory of the Cup because it was all so incredible,” admitted Nicolas Poirier. “What I can say is that even today at work, the fact that I’m a MasterCard Memorial Cup champion still generates interest and discussion. I will always be proud to have been a part of a championship team.”

In 2005, the spotlight was clearly on the Océanic and the London Knights since both teams had enjoyed amazing stretches during the regular season. At only age 17, Sidney Crosby was the player all three other teams were watching. Rimouski lost its first game to London in OT, but then bounced back with wins over the Kelowna Rockets and Ottawa 67’s. In the semi-finals, a five-point game by Crosby powered the Océanic to a 7-4 win over Ottawa. Rimouski couldn’t get past the Knights in the final however, losing 4-0 despite the best efforts of Crosby, Marc-Antoine Pouliot, Patrick Coulombe and Mario Scalzo Jr.

“When we arrived in London, all eyes were on us because of the amazing end to our season and because we had the No. 87 on our side. We had a great tournament and I’m still proud to have been a part of it,” said Patrick Coulombe. “I remember it like it was yesterday; we had won the semi final on Saturday and then we had the final only 20 hours later. The night before the final, my roommate Marc-Antoine Pouliot and I had a lot of trouble falling asleep. We were still full of adrenaline from having won the semis and we were really excited to play in the final with a chance to win the MasterCard Memorial Cup.

“Unfortunately, we came up short against a powerhouse London Knights team. Working as hard as we did to get there and then to not win was tough to take. But still with a bit of perspective, I can only be proud of all we accomplished and what I got to experience,” said the Océanic’s former No. 5. “When a team battles until the bitter end and leaves it all on the ice, you can’t have any regrets. And that’s exactly what we did that night. It was one of the most memorable moments of my career and I will always remember it.”

In 2009, the Oceanic played host to the MasterCard Memorial Cup. Despite a loss in the semi-finals of the QMHJL playoffs, Rimouski still had their ticket to the MasterCard Memorial Cup locked up. Clément Jodoin’s squad lost its opening game to the Kelowna Rockets. They then downed the Windsor Spitfires in their second game before losing in OT to Drummondville. In the tie-breaking game against Windsor, Rimouski held a 4-2 lead in the third period, but then the Spitfires exploded for four goals to escape with the win.

“The Memorial Cup for me was a memorable moment to cap my junior career. The team had pulled out all the stops with a new scoreboard, renovations to their arena and to the dressing room. It was really professional,” said Marc-André Bourdon. “The fans were fired up and the vibe around the team was really amazing. The media presence was at the highest it had ever been and we were all young guys aged 16-20. I still consider myself very fortunate to have gotten chance to take part in that tournament.”

“The 2009 MasterCard Memorial Cup is definitely one of the greatest memories of my career. It was really special to get to play at home in front of our fans, family and friends,” recalled Jordan Caron. “The city was all about hockey and the atmosphere at the Colisée was incredible. I won’t ever forget it.”