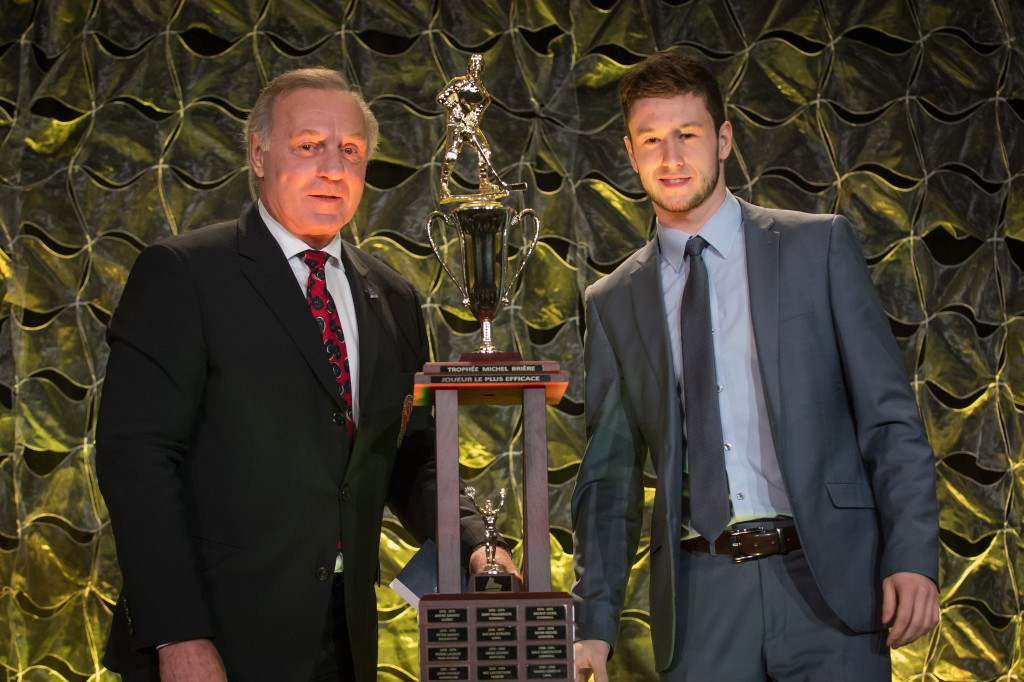 MONTREAL, April 6th, 2016 – The Golden Puck Awards, presented annually by the Quebec Major Junior Hockey League, were held this evening at the elegant Hyatt-Regency Hotel located in the heart of Montreal. This year, twelve prestigious trophies were awarded to the most deserving personalities of the 2015-16 season. Five junior hockey legends were also inducted into the QMJHL Hockey Hall of Fame.

Hosted by Sportsnets’ Rob Faulds and TVA Sports’ Louis Jean, the evening was a huge success.

“This evening represents a superb gathering,” said the Commissioner, Gilles Courteau. “Over 350 people were present to welcome and honour five new members to our Hall of Fame: Daniel Brière, Réal Cloutier, Ron Lapointe, Mario Marois and José Théodore. This event was made even more special as past legends receive the recognition they deserve for their exceptional careers next to the biggest names of tomorrow. In fact some of our award winners might one day become inductees.”

The highlights from the awards ceremony will be presented on TVA Sports on April 16.

The Nova Scotia native took part in 38 games, winning 29. In addition, he recorded two shutouts, maintained a save percentage of .911 and a goals against average of 2.42.

A native of Russia, Abramov is the rookie of the year thanks to his outstanding performances during his first season. He concluded the regular season with 93 points, including 38 goals, in 63 games with the Olympiques.

In his third year as the Huskies’ head coach, Bouchard was able to lead his team to the top of the QMJHL standings with 113 points. He was able to get the best out of his players.

For a second year in a row, the Moncton Wildcats’ forward wins this honour. He tallied 39 goals and 89 assists for 128 points in 62 games. He also maintained a +26 rating.

Alexis is a devoted young man on the ice and in his studies. He is currently studying in natural sciences at Shawinigan’s college.

The game of hockey is extremely intense and competitive and passion is a key part of the sport. For most who play at this level, passion is also what drives them to make a difference in their communities. As they become role models to the next generation, they deserve to be recognized and appreciated for the outstanding work they accomplish. Laberge has been involved in many team activities as well as taking his own initiatives. He also distinguished himself by raising over $7,000 for the “Shaved heads” challenge by the Eastern Cancer Association of Quebec.

The Quebec defenseman scored 10 goals added 64 assists for a total of 74 points in 67 games. He also finished the season as leading scorer among defensemen.

Samuel also wins most sportsmanlike player. He only spent 10 minutes in the penalty box

Dubois is undoubtedly one of the best hopes for the Quebec Major Junior Hockey League in the upcoming NHL Entry Draft. In his third season in the QMJHL, he scored 42 goals added 57 assists in 62 games. He also maintaind a +40 rating.

Gilles Bouchard is rewarded again. In addition to winning the Ron-Lapointe trophy, he is named the General Manager of the year for his excellent work with the 2015-16 regular season champions.

Dubois demonstrated exemplary behaviour during the season. He represented the Screaming Eagles and the Quebec Major Junior Hockey League in a positive manner.

The Ottawa Senators’ prospect, Francis Perron, is awarded the prestigious honour of the most valuable player during the 2015-16 season.