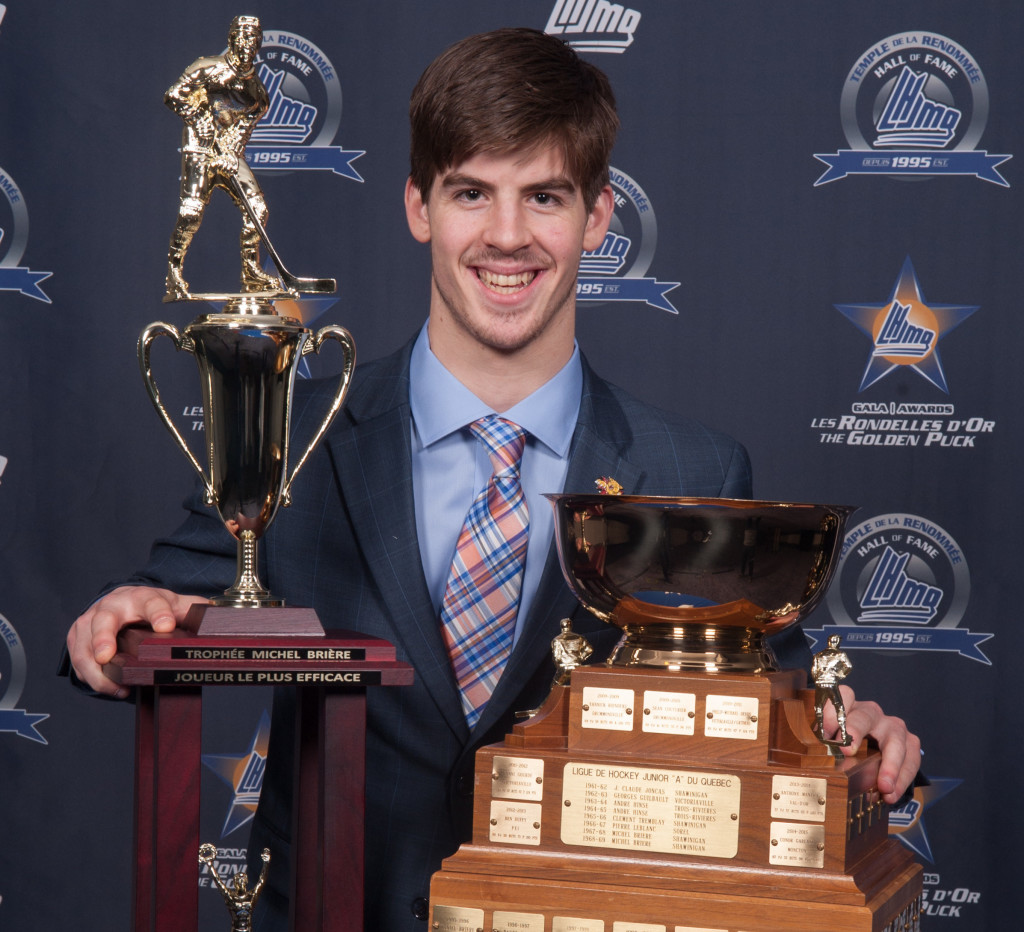 MONTREAL, April 8th, 2015 – The Golden Puck Awards, presented annually by the Quebec Major Junior Hockey League, were held this evening at the elegant Hyatt-Regency Hotel located in the heart of Montreal. This year, twelve prestigious trophies were awarded to the most deserving personalities of the 2014-15 season. Five junior hockey legends were also inducted into the QMJHL Hockey Hall of Fame.

Hosted by TVA Sports’ Louis Jean and Andrée-Anne Barbeau, the evening was a huge success.

“This evening represents a superb gathering,” said the Commissioner, Gilles Courteau. “Over 350 people were present to welcome and honour five new members to our Hall of Fame: Jean Rougeau, Billy Campbell, Martin Gelinas, Michel Therrien and Martin Brodeur. This event was made even more special as past legends receive the recognition they deserve for their exceptional careers next to the biggest names of tomorrow. In fact some of our award winners might one day become future inductees.”

The St-Hyacinthe native took part in 44 games, winning 29. In addition, he recorded five shutouts, maintained an save percentage of .901 and a goals against average of 2.50.

Timashov is the rookie of the year thanks to his outstanding performances during his first season. He finished the season with 19 goals, 71 assists for 90 points in 66 games with the Remparts.

Bouchard was able to lead his team to the top of the West division and third overall in the QMJHL standings with 91 points. He was able to get the best out of his players.

The Moncton Wildcats’ forward tallied 35 goals and 94 assists for 129 points in 67 games. He also maintained a +21 rating.

Gregory is a determined young man on the ice and in his studies. He is currently stuying in social studies/administration at Cégep de Baie-Comeau.

The game of hockey is extremely intense and competitive and passion is a key part of the sport. For most who play at this level, passion is also what drives them to make a difference in their communities. As they become role models and maybe heroes to the next generation, they deserve to be recognized and appreciated for the outstanding work they accomplish. Martel has been involved in many team activities as well as taking his own initiatives to make sure that his community involvement counts.

The Czech Republic native scored 7 goals added 36 assists for a total of 43 points in 57 games. He also completed the season with a +55 rating.

With a total of 88 points, including 42 goals, Farrell deserves the honor of the most sportsmanlike player. He only got 24 penalty minutes this season.

Meier is undoubtedly one of the best hopes for the Quebec Major Junior Hockey League in the upcoming NHL Entry Draft. This season he reached the 90-point plateau in only his second season in the QMJHL. He scored 44 goals added 46 assists for a total of 90 points and in 61 games. He also kept a +20 rating.

Martin Mondou is named the General Manager of the year for his excellent work with the Cataractes. He provided his coach with players to field a competitive team and finish the regular season in fifth place in the overall standings.

Ehlers demonstrated exemplary behavior during the season. He represented the Mooseheads and the Quebec Major Junior Hockey League in a positive manner. He also helped Denmark win their first ever game in the first division of the U20 World Junior Championship.

In addition to winning the Jean-Béliveau Trophy, Conor Garland is awarded the prestigious honour of the most valuable player during the 2014-15 season.