Straka, MacKinnon and Desrosiers named the TELUS three stars of the week 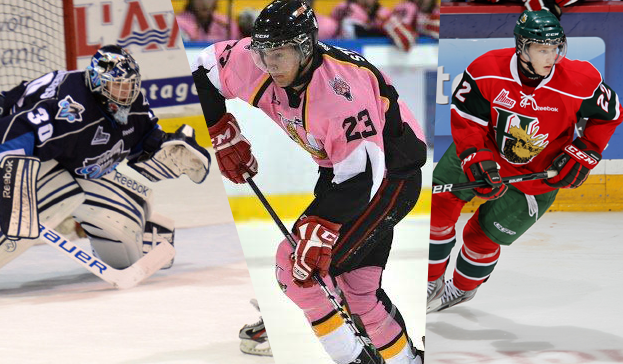 Petr Straka, Nathan MacKinnon and Philippe Desrosiers were named today the TELUS three stars of the week for the period extending from October 15 to the 21st.

Petr Straka, the Baie-Comeau Drakkar’s forward, collected 7 points, including 4 goals, in three games. The Czech native registered at least 2 points in each game. He was selected as the first star in a game against the Saguenéens on Wednesday after registering 3 points in a 5-4 shootout loss. Friday, after having scored the tying goal which tied the score 4-4 and which eventually brought the game into overtime, he finally solved the goaltender in the shootout to help his team earn a 5-4 victory over the Blainville-Boisbriand Armada. Saturday, he scored his 6th and 7th goals in only his 8th game of the season to beat the Sea Dogs 6-2.

As regular as clockwork since the beginning of the season, Nathan MacKinnon, the Halifax Mooseheads forward, totalled 6 points this week, scoring 4 goals. Wednesday, with his team trailing 5-2, MacKinnon scored the goal which rallied the troops. The Mooseheads responded by scoring 5 unanswered goals to seal a 7-5 win. Friday, against the Sherbrooke Phoenix, he was named the first star after scoring 2 goals and adding 1 assist. In a 4-3 win on Sunday against the Acadie-Bathurst Titan, the Mooseheads rolled to their 10th consecutive win. MacKinnon scored the winning goal versus the Titan on top of getting an assist. It was his 15th goal this season, which brings his total to 7 consecutive games with at least one goal.

Philippe Desrosiers, the Rimouski Océanic goaltender, posted a goals-against-average of 2.15 this week and a good efficiency rating of 0.935 (87 saves on 93 shots). Wednesday, against the Blainville-Boisbriand Armada, he was named the first star in a 3-1 loss during which he made 33 stops. Friday, in the Océanic’s 4-0 win, he celebrated his first shutout victory in the QMJHL with 31 saves which earned him, for a second consecutive game, first star honours. Sunday, he took over for his teammate Carl Hozjan and allowed 3 goals on 26 shots in 49 minutes in a 5-4 loss against the Cape Breton Screaming Eagles.