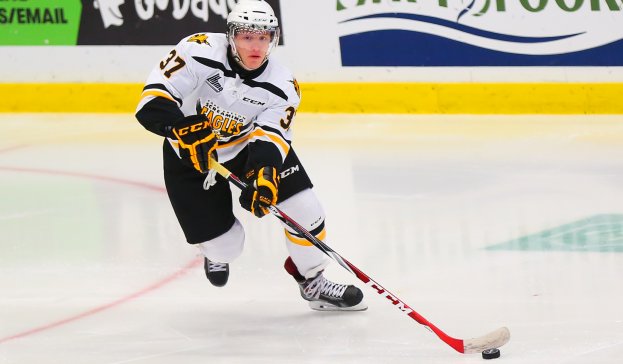 Toronto, ON – The Canadian Hockey League today announced that 2015 NHL Draft prospect Evgeny Svechnikov of the Cape Breton Screaming Eagles is the CHL Player of the Week for the week ending January 11 scoring three goals with six assists for nine points in three games and a plus-minus rating of plus-4.

Svechnikov produced back-to-back four-point games for the Screaming Eagles who won all three games last week as the club battles to hold onto the final playoff spot in the QMJHL standings.  On Wednesday night Svechnikov recorded his first career four-point game with two goals including the game-winner plus two assists as first star of a 5-4 win at home over the Gatineau Olympiques.  The Screaming Eagles then traveled for a pair of road games against the Acadie-Bathurst Titan with Svechnikov collecting a career-high four assists as third star of the 8-1 win on Friday, then scored one goal in Saturday’s 4-0 win.

Svechnikov, an 18-year-old Russian native is playing in his first QMJHL season with the Screaming Eagles.  Tied for third in rookie scoring with 46 points in 32 games, Svechnikov is eligible for the 2015 NHL Draft and will compete in the BMO CHL/NHL Top Prospects Game on January 22 in St. Catharines as a member of Team Cherry.

Also considered for the award this week was Columbus Blue Jackets prospect Oliver Bjorkstrand of the Portland Winterhawks with four goals and four assists for eight points in three games, and defenceman Trevor Murphy of the Windsor Spitfires with seven assists in three games.