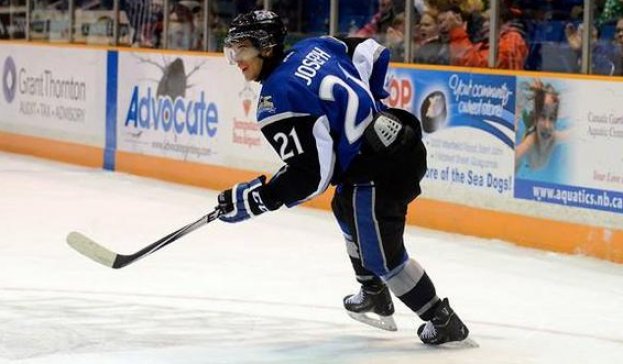 Joseph’s first goal came just 41 seconds into the first period and he scored shorthanded nearly 15 minutes later into to give Saint John a 2-0 lead. His third goal came on a power play with 22 seconds left in the second period.

Daniel Den Paggio had a goal and as assist for the Sea Dogs and Joe Veleno, Sam Povorozniouk and Samuel Dove-McFalls also scored.

Christophe Boivin had the lone goal for the Titan, who are one loss away from elimination in the best-of-seven series.

Saint John was 2 for 4 on the power play while Acadie-Bathurst scored once on five chances with the man advantage.

CHARLOTTETOWN — Luc Deschenes scored twice as the Islanders downed Rimouski to take a 2-1 lead in their first-round series.

Daniel Sprong and Oliver Cooper had a goal and an assist apiece for Charlottetown and Will Thompson, Filip Chlapik, Filip Rydstrom and Mitchell Balmas rounded out the offence.

Deven St-Hilaire and Matous Belohorsky scored for the Oceanic.

Rimouski’s Andrew Picco and Antoine Dufort-Plante were given game misconducts. Picco’s came 59 seconds into the third period for checking from behind and Dufort-Plante’s was handed out at 19:33 of the third for unsportsmanlike conduct.

DRUMMONDVILLE, Que. — Jean-Christophe Beaudin and Antoine Waked each scored twice to power Rouyn-Noranda over the Voltigeurs for a 3-0 lead in their first-round series.

Francis Perron scored once and added three assists for the Huskies, Jeremy Lauzon and Nikolas Brouillard had a goal and a helper apiece and John-Anthony Greer and Zachary Lauzon supplied the rest of the offence.

Gabriel Slight had the lone goal for Drummondville, which had been shut out in the first two games of the series.

SHERBROOKE, Que. — Anthony Beauvillier and Cavan Fitzgerald each found the back of the net twice as Shawinigan toppled the Phoenix to go up 2-1 in their playoff series.

Danny Moynihan and Gabriel Gagne had a goal and three assists apiece for the Cataractes, who scored six times in the second period. Alex Pawlczyk scored once and set up two more and Dennis Yan had a goal and an assist.

QUEBEC CITY — Gabryel Paquin-Boudreau had a hat trick and an assist as Gatineau beat the Remparts to extend its series lead to 3-0.

Vitalii Abramov scored two goals and set up another for the Olympiques, who can close out the series with a victory on Wednesday. Austin Eastman had a goal and two assists, Alex Dostie had a goal and one assist and Guillaume McSween and Yan Pavel Laplante also scored.

VICTORIAVILLE, Que. — Stephen Johnson struck twice as Moncton pushed the Tigres to the brink of elimination.

Cody Donaghey and Cameron Askew had a goal and an assist apiece for the Wildcats, who lead the best-of-seven series 3-0. Manuel Wiederer also scored and Conor Garland tacked on three assists.

Bradley Lalonde had both goals for Victoriaville.

BOISBRIAND, Que. — Miguel Picard’s goal midway through the third stood as the winner, putting the Armada up 2-1 in their best-of-seven series with Val-d’Or.

Yvan Mongo gave Blainville-Boisbriand a 1-0 lead in the second period and Philippe Sanche added an empty netter late in the third.

Alexis Pepin scored the lone goal for the Foreurs in the third period.

Maxim Lazarev struck twice and Phelix Martineau had the other for the Screaming Eagles.

Nicolas Roy had a pair of goals for Chicoutimi and Alexandre Jacob scored once.