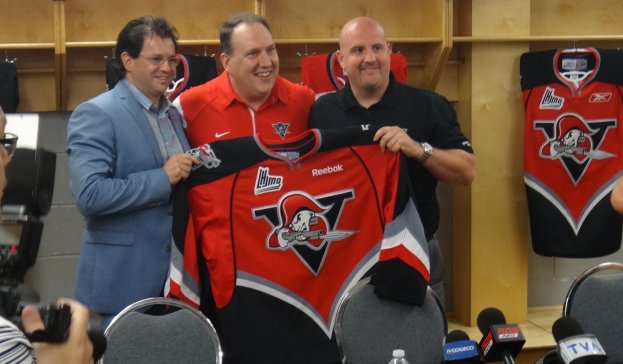 The 46-year-old native of Pierrefonds, Que., signed a three-year deal. He spent the past three years in the NHL with the Tampa Bay Lightning and finished the final month of his contract as an assistant coach with Tampa’s American Hockey league affiliate in Syracuse, where they reached the Calder Cup final.

He left McGill in 2009 to serve as an assistant coach with the AHL’s Hamilton Bulldogs and after that season, made the jump to the NHL, where he was appointed to Guy Boucher’s coaching staff with the Lightning.

A 2011 inductee to the McGill Sports Hall of Fame, Raymond graduated from the University in 1990 with a bachelor of education and followed by a master’s degree in physical education (1996). He played five seasons for the Redmen, earning all-conference honours three times and All-Canadian status in his final season (1991-92) when he served as team captain.

During his tenure at McGill, he produced 30 players who went on to playing careers in pro hockey, including one in the NHL (Mathieu Darche) and six others with stints in the AHL (Greg Davis, Pierre Gendron, Daniel Jacob, David Urquhart, Jean-Michel Daoust, Maxime Langelier-Parent).

He also coached the Quebec provincial team to a bronze medal at the 2004 under-17 world hockey championships in St. John’s, Nfld., and guided the Roller Hockey International’s Montreal Roadrunners for two summers in addition to running the Montreal Canadiens rookie camp in 1997.

Raymond played professional hockey in Germany (EA Schongau) for one season after finishing a brilliant playing career at the CIS level. He graduated as McGill’s all-time assist leader with 144 (now ranked second), is still listed third in career points (253 in 154 games) and third in career goals (109).

He also won a bronze medal while playing for Team Canada at the 1991 Spengler Cup tournament in Davos, Switzerland. Raymond received the Forbes Trophy in 1992 as McGill’s male athlete of the year and the Bobby Bell Trophy as Team MVP in 1991-92 after leading the Redmen in scoring with 34-37-71 in 36 games.