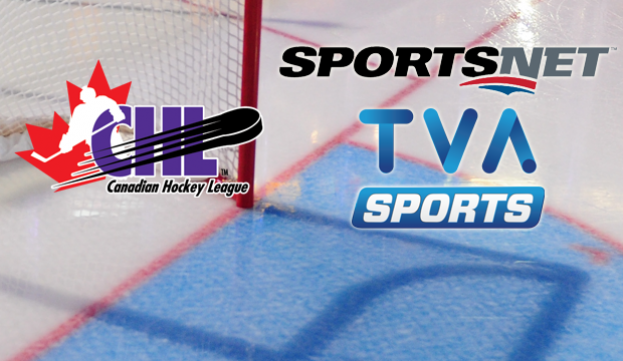 TORONTO (February 18, 2014) – The Canadian Hockey League and Sportsnet today announced a 12-year partnership extension through the 2025-26 CHL season, continuing Sportsnet’s tradition as the exclusive broadcaster of the CHL and MasterCard Memorial Cup in Canada.

The new agreement, which begins with the 2014/15 season, features a comprehensive suite of multimedia rights including television, online and mobile, delivering more than 50 CHL games each year, including CHL playoff games and the MasterCard Memorial Cup.

Sportsnet has been broadcasting CHL games since the network’s inception in 1998.

“We are committed to serving hockey fans and growing the game of hockey across Canada like never before. In combination with our ground-breaking NHL agreement, this truly cements Sportsnet as Canada’s home of hockey,” said Scott Moore, President, Sportsnet and NHL, Rogers Media. “Our partnership with the CHL is a strong and important one. Together, we will build on the already strong foundation of our Friday Night Hockey brand, and weave the CHL even deeper into the fabric of Canadian hockey culture. In addition to our game coverage, we will continue to tell the stories of major junior hockey in Canada, build stars, and remain with them on their journey through the NHL.”

“This is a very exciting day for the Canadian Hockey League as we continue to grow our relationship with Sportsnet and TVA Sports over the next 12 years,” said CHL President David Branch.  “The CHL’s partnership with Sportsnet began 16 years ago and in that time the league has enjoyed extraordinary growth by building the brand of our national events and our entire league through Sportsnet’s outstanding and passionate nationwide coverage.  We look forward to working together to grow the game of hockey and continue showcasing the league’s next wave of talent to the National Hockey League and Canadian Interuniversity Sport for our fans, players, and their families.”

“Our partnership with the CHL and QMJHL allows TVA Sports to strengthen its commitment to tomorrow’s stars and hockey in Quebec. Over the next 12 years, by presenting major junior hockey and more than 300 NHL games, TVA Sports confirms its position as the number one destination for hockey in Quebec,” says Pierre Dion, TVA Group President and CEO. “This new agreement confirms, once more, the great partnership between Sportsnet and TVA Sports which we are very proud.”

Today’s announcement strengthens Sportsnet’s hockey leadership in Canada and complements Rogers’s 12-year partnership with the NHL, which also begins with the 2014-15 season. Beginning in 2014-15, Sportsnet is the official national broadcast partner of the CHL and NHL, and is also the regional broadcaster of the Calgary Flames, Edmonton Oilers, Toronto Maple Leafs, and Vancouver Canucks.