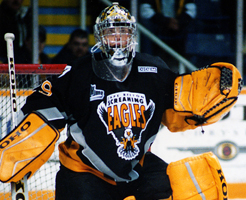 The official Website of the QMJHL, asks a former QMJHL player – now playing in the NHL – a few quick questions. We caught-up with Screaming Eagles alumni Marc-André Fleury of the Pittsburgh Penguins.

"The Montreal Canadiens of course."

"It has to be when my coach, Pascal Vincent, told me that I had made the team."

<i>What’s the best advice he gave you over the course of your major junior career?</i>

"He told me to have fun out there and to stop analyzing everything. I performed much better when I was having fun."

"Hmm, there were a lot of very good players in the Q, but I’d have to say Pierre-Marc Bouchard of Chicoutimi (now with the Minnesota Wild). We knew each other very well, so it was fun. Also, Simon Gamache of Val-d’Or was always a threat."

<i>What’s the biggest difference you found between major junior and the pros?</i>

"The speed. Also, you have to pay close attention to third and fourth line players, since they can score like the best of them."

"I’d still have to say hockey, but I do play street hockey, beach volleyball and I like riding boats in the summer time."

"I’d say it’s my speed and pad work. I can get around pretty quickly."