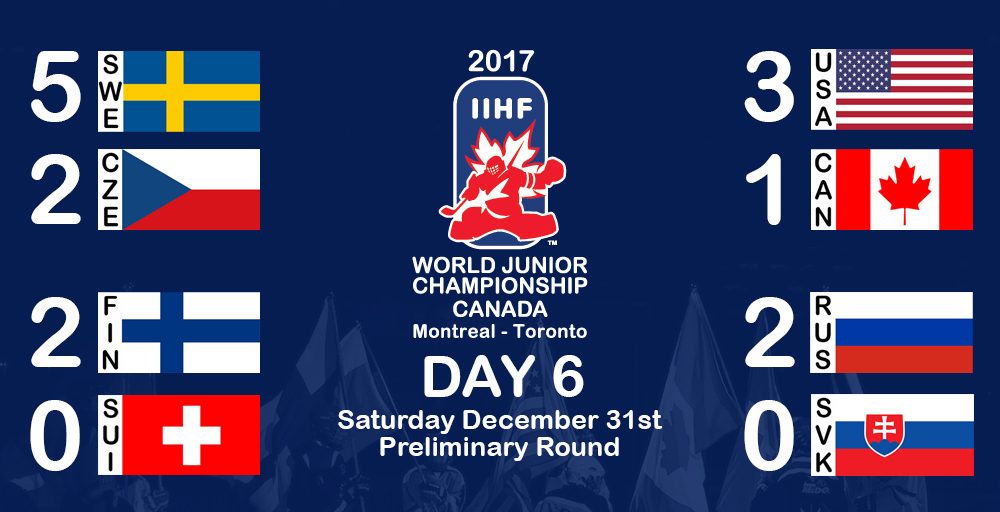 The preliminary round of the 2017 IIHF World Junior Hockey Championship came to a close on Saturday, rounding out the 2016 calendar year with four great contests that included wins by the United States, Sweden, Russia and Finland. Here’s a look at the action from New Years Eve in Toronto and Montreal.

CANADA 1
TORONTO – Toronto Maple Leafs prospect Jeremy Bracco (Kitchener Rangers) had a goal as the United States secured Group B with a 3-1 win over Canada at the Air Canada Centre. The U.S. win is its first over Canada on New Years Eve at the World Juniors in 18 years spanning seven encounters including six losses and one tie. Canada outshot the Americans 26-20 as Thomas Chabot (Saint John Sea Dogs) scored the lone goal in the loss with assists going to Mathew Barzal (Seattle Thunderbirds) and Dylan Strome (Erie Otters). The win sees the United States finish the preliminary round with a perfect 4-0 record while Canada sits at 3-1 and will face the Czech Republic in Montreal on Monday at 8:00pm ET. The United States will face Switzerland on Monday in Toronto at 5:30pm ET.

CZECH REPUBLIC 2
MONTREAL – Sweden jumped out to a 3-0 lead on the Czech Republic and never looked back, eventually taking a 5-2 victory at the Bell Centre. Former Mississauga Steelheads winger Alexander Nylander had a pair of assists while Ottawa Senators prospect Filip Ahl (Regina Pats) chipped in with one of his own. Sweden’s offence was powered by a hat-trick from forward Jonathan Dahlen as they finished the preliminary round with a perfect 4-0 record. Czech defenceman Filip Hronek (Saginaw Spirit) had a goal in the loss while forward Filip Chlapik (Charlottetown Islanders) registered an assist. The Czech Republic sits at a mark of 1-1-2 and will face Canada on Monday in Montreal at 8:00pm ET. Sweden squares off against Slovakia on Monday in Montreal at 3:30pm ET.

SLOVAKIA 0
TORONTO – Nashville Predators prospect Yakov Trenin (Gatineau Olympiques) had a goal as Russia blanked Slovakia 2-0 at the Air Canada Centre. Former Calgary Hitmen forward Pavel Karnaukhov chipped in with an assist for the Russians who outshot Slovakia 30-15 to finish the preliminary round with a 2-2 record. Slovakia sits at 1-3 and will face Sweden on Monday in Montreal at 3:30pm ET. The Russians prepare to face Denmark in Toronto on Monday at 1:00pm ET.

SWITZERLAND 0
MONTREAL – Finland ended a disappointing preliminary round on a high note with a 2-0 blanking of Switzerland at the Bell Centre. Detroit Red Wings prospect Vili Saarijarvi (Mississauga Steelheads) had an assist as the Finns improved to 1-3, but will still be forced into relegation play against Latvia beginning on Monday in Montreal at 11:00am. Finland outshot Switzerland 51-17 in the victory as Swiss netminder Joren Van Pottelberghe was the difference with a 49-save performance. Switzerland moves on to face the United States in Quarter-Final action on Monday in Toronto at 5:30pm ET. Switzerland has a chance to earn its first medal at the World Juniors since winning bronze in 1998.