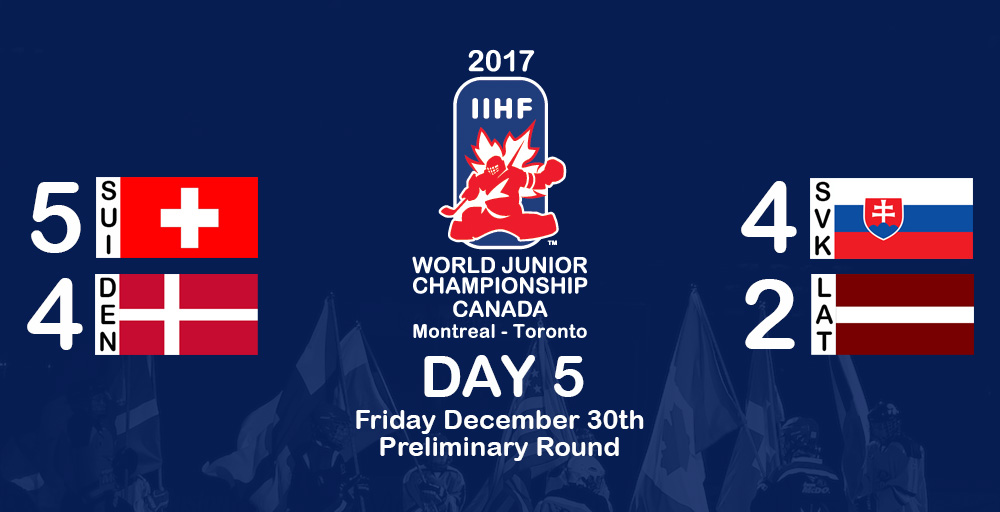 A pair of outcomes were established on Day 5 of the 2017 IIHF World Junior Hockey Championship as Switzerland overcame a 4-1 deficit to defeat Denmark and spell bad news for reigning gold medalist Finland, bumping them into relegation play. Slovakia secured a spot in the Quarter-Finals with a 4-2 win over Latvia in Toronto. Here’s a look at the action.

MONTREAL – Marco Miranda scored the shootout winner as Switzerland clawed back from down 4-1 to defeat Denmark 5-4 at the Bell Centre. The Swiss victory means reigning gold medalist Finland will be forced into relegation games after playing to an 0-3 mark to this point in the preliminary round. This marks the first time in event history that a gold medalist has returned to play in the relegation round the next year. 2017 NHL Draft prospect Nico Hischier (Halifax Mooseheads) had a goal for Switzerland in the victory. Denmark had strong performances from captain Alexander True (Seattle Thunderbirds) who had a goal and an assist as Player of the Game while Joachim Blichfeld (Portland Winterhawks) also tallied. Switzerland outshot Denmark 53-22. Both clubs remain in contention heading in the final day of preliminary play on Saturday. Denmark finished the preliminary round with a record of 2-1-1 while Switzerland squares off with Finland at 5:30pm ET.

LATVIA 2
TORONTO – Slovakia skated to a much-needed 4-2 win over Latvia at the Air Canada Centre, securing a spot in the Quarter-Finals ahead of Saturday’s preliminary round finale against Russia. The Slovaks outshot Latvia 36-24. Martins Dzierkals (Rouyn-Noranda Huskies) and Rudolfs Balcers (Kamloops Blazers) both had assists in the loss for Latvia. Latvia will face Finland in a best-of-three relegation series that begins on Monday in Montreal.