Windsor soars to victory over Saint John in opening game 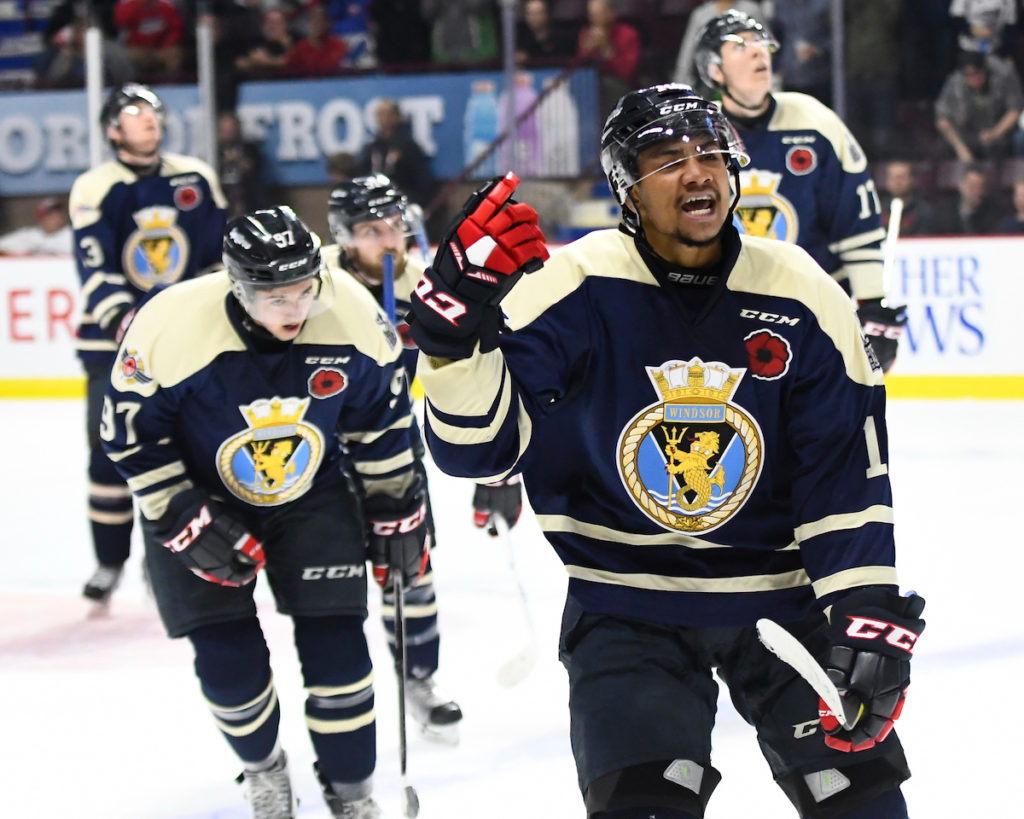 The 99th edition of the MasterCard Memorial Cup got underway on Friday night with a Windsor Spitfires’ 3-2 win over the Saint John Sea Dogs at the WFCU Centre.

In the end, the 44-day, six-week layoff proved to not be a problem at all for the Spitfires, who hadn’t played since being eliminated in the opening round of the OHL playoffs by the 2016 Memorial Cup champion London Knights. Rocky Thompson’s squad came out flying, showing no signs of rust on their way to their impressive victory.

The Spitfires broke the ice when Jeremy Bracco made a great play to set up Jeremiah Addison for a nifty power-play goal with just over four minutes to play in the opening period. Addison snapped a wrist shot up high to beat Callum Booth of the Sea Dogs as Aaron Luchuk also picked up an assist on the goal.

Bracco was then at it again late in the second period when he sped down the wing before swooping in on Booth and stuffing his own rebound past the Sea Dogs’ netminder. Spitfires’ star blue-liner Mikhail Sergachev assisted on the goal on a strong night for the Montreal Canadiens’ prospect who would add a second assist on his way to a +2 rating on the night.

The Spitfires added a third goal when Luchuk beat booth in close at the 4:38 mark of the final period.

It may have been a relatively quiet night for Michael DiPietro in goal for the Spitsfires, but the 17-year-old kicked aside 20-of-22 shots he faced, making some key saves – especially late in regulation. Eligible for this summer’s NHL Draft, DiPietro is ranked fourth among North American goalies. Booth meanwhile allowed three goals on 23 shots for the Sea Dogs.

Having earned their Memorial Cup berth by virtue of being hosts of this year’s tournament, the Spitfires are looking to become the first team in tournament history to win the Memorial Cup after being ousted in the opening round of the playoffs.

The Sea Dogs meanwhile arrived in Windsor about as hot as a team can be, coming in after winning the QMJHL championship with an staggering 16-2 record, including a four-game sweep of the Blainville-Boisbriand Armada in the President’s Cup Final.

Now 0-1, the Sea Dogs are the most prospect-laden club in the tournament with no less than 11 players already drafted by NHL teams, including QMJHL MVP, Chabot. The Sea Dogs’ blue line leader had another busy night in a losing cause for Saint John scoring a goal and was even on the night.
The game didn’t lack in physical play with the teams combining for no less than 11 penalties. The second-most penalized team in the CHL during the regular season, the Sea Dogs gave the Spitfires four power-plays on the night with Windsor scoring once with the extra man. The Sea Dogs were 1-for-5 on the power-play.

Next up for Spitfires is a battle with the WHL champion Seattle Thunderbirds on Sunday night at 7:00 p.m. The Sea Dogs now face a must-win situation when they lock horns with the OHL champion Erie Otters on Monday night also at 7:00 p.m.

The tournament action continues Saturday afternoon when the Otters take on the Thunderbirds. Puck drop is at 3:00 p.m., and as always you can catch it on Sportsnet and TVA Sports.