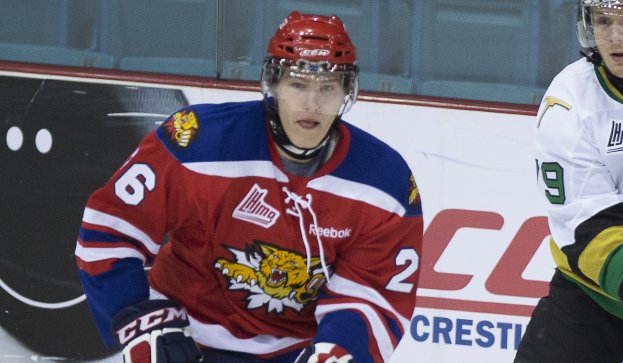 Toronto, ON – The Canadian Hockey League today announced that Dmitrij Jaskin of the Moncton Wildcats is the CHL Player of the Week for the week ending January 27 after scoring seven goals with four assists for 11 points in four games while posting a plus-minus rating of plus-6.

Jaskin led the offensive charge for the Wildcats who picked up four victories last week to extend their winning-streak to eight games.  He also extended his personal point-streak to 11 games following multi-point efforts in all four games beginning Wednesday with one goal and two assists as third star of a 6-1 win over the P.E.I. Rocket.  He followed that up by claiming first star honours in three straight games including Friday night with two goals and one assist in a 5-0 win over the Acadie-Bathurst Titan, Saturday with a goal and an assist in a 4-2 win over the Titan, and Sunday when he recorded his first career hat-trick as part of a 6-2 win over the Quebec Remparts.

Jaskin, a 19-year-old born in Omsk, Russia, is playing in his first QMJHL season with the Wildcats.  Selected in the second round of the 2011 NHL Entry Draft by the St. Louis Blues, Jaskin is currently third in QMJHL scoring with 35 goals and 40 assists for 75 points in just 39 games.