Wildcats Announce Captain and Assistant Captains for the 2016-17 Season! 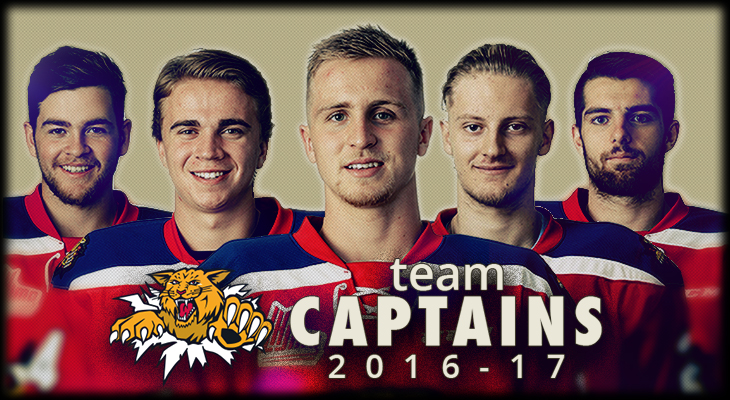 MONCTON N.B. – The Moncton Wildcats are proud to announce the captain for this 2016-2017 season is #17 Lane Cormier. Assistant captains will be #2 Adam Holwell, and #26 William Bower (home), while #21 Manuel Wiederer, and #27 Zach Malatesta will be the assistants while the team is on the road.

Drafted in the 2013 QMJHL Entry Draft, Lane Cormier is now entering his third season with the Wildcats. The 19-year-old Nova Scotia native has appeared in 109 QMJHL games with Moncton to date. The physical forward is not only a strong presence on the ice, but he is a great leader and will be able to guide this younger team through the season ahead.

Holwell and Bower will wear the A’s on home ice this year. Both east coast born players are gearing up for their fourth season with the team. Always solid on the blue line, Adam Howlell has worn the Wildcats sweater for 197 games, recording 57 points. While forward, Will Bower has registered 135 games with the Cats notching 51 points over the three seasons.

Our two road assistant captains will be Manuel Wiederer and Zach Malatesta, both 20-year-olds in this year’s lineup. Although  last season was Wiederer’s debut in the QMJHL he was an immediate impact player, recording 64 points in 54 regular season games played.

Wildcats defencemen Zach Malatesta is now entering his third with the team, born in Boston Massachusetts Zach is a physical and dominant presence on the ice. Malatesta has appeared in 133 regular season games for Moncton to date recording 56 points.

“We feel very good about our leadership group, said Wildcats Head Coach, Darren Rumble.” “They are strong hockey players, and even better people. Our new younger players are in a great situation to be able to learn from these well versed veterans.”

The Wildcats home opener is tomorrow night at 7:00 p.m. vs. the Halifax Mooseheads! Don’t wait to get you tickets, or if you have flex tickets for the game be sure to redeem them early to avoid lines.

Then the Cats are back on the ice Sunday for game two as they host the Charlottetown Islanders at 4:00 p.m.