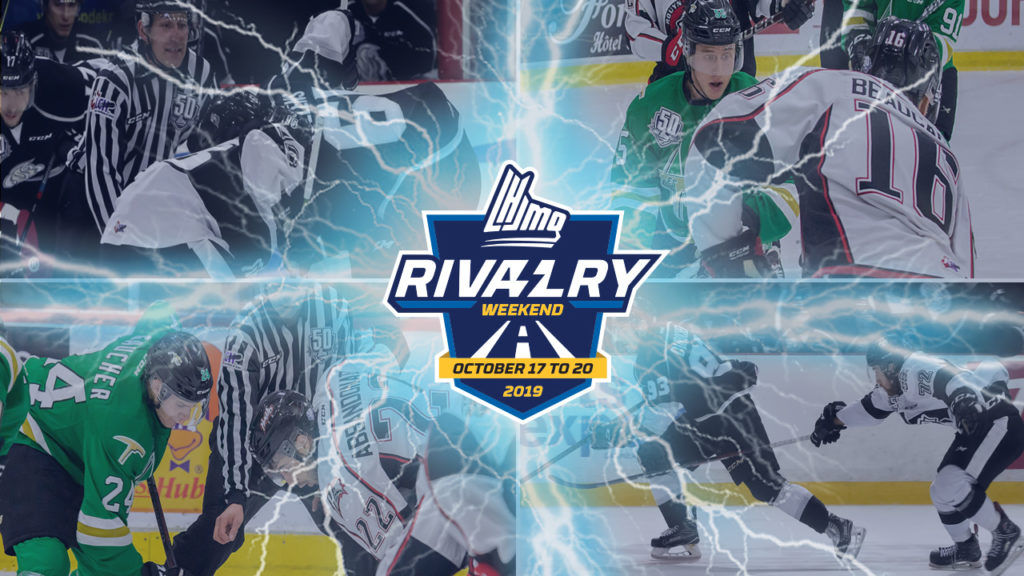 Over the years, the teams of the QMJHL’s Western Division have provided fans with more memories than the mind can contain. With Rivalry Weekend sweeping the league in the coming days, the four clubs in this group should no doubt provide more of the same.

Rouyn-Noranda versus Val d’Or. Huskies versus Foreurs. Two of the league’s most remote teams doing battle in the wilds of Northern Quebec. Year after year, the urge remains strong for these two clubs to beat one another. And beat up on one another. It could be Game 7 of the President Cup Final or a ball hockey game at a parking lot in Matagami in mid-July. No matter the circumstances, when the Huskies and Foreurs clash, expect nothing less than war.

Welcome to the Battle of Route 117.

The Foreurs sit fifth in the Western Conference as the new week dawns. Defensively, the club has been mostly adept. Between veterans Karl Boudrias, David Noel and Ottawa Senators prospect Maxence Guenette, not to mention the steady netminding of Jonathan Lemieux, the club has been doing its level best to keep the puck out of the net. Filling the opposition’s cage has been an entirely different story.

The Foreurs have tallied seven goals on two occasions this year. In eight other games, they’ve failed to score more than three. With the aforementioned Boudrias leading the charge offensively, the fact that the offense has been running in fits and starts has been giving Foreurs fans fits themselves.

It would be hard to top what the Huskies accomplished last year. However, what they’ve cooked up for an encore to this point in the year has been nothing short of impressive. Leading the Western Division standings, the club has relied on a number of returning veterans for guidance. Delivering in that role, among others, are wingers Tyler Hinam and Alex Beaucage, center and team scoring leader Vincent Marleau and blueliner Justin Bergeron. 2018 San Jose Sharks draft selection Zachary Emond has held the fort admirably, as his .912% save percentage can attest. Though no longer a dominant force, the Huskies are still capable of giving any team a run for their money on any given night.

Then there’s what’s happened since these two teams last met last March 13th. That would be the Huskies’ march to first a President Cup then a Memorial Cup title. And it is under that backdrop of bragging rights that the latest era in this most heated of rivalries commences, with games on Friday night in Rouyn-Noranda and Saturday afternoon in Val d’Or.

All Black and All White

Sometimes, you need to defeat a rival to get your season turned around. The Blainville-Boisbriand Armada and Gatineau Olympiques both hold onto this hope as they prepare to face one another this weekend.

The Armada, in the process of putting the pieces together in the wake of back-to-back President Cup Final appearances in 2017 and 2018, began the season with points in three of their first four games including a win over the defending champion Huskies on opening night. Since then, it’s been a struggle. Sporting one win in their last five entering this week, the club is hoping to rebound. With steady starts to the season by winger Benjamin Corbeil and center Luke Henman as well as points against the Huskies, Chicoutimi and Rimouski already in the bank, the squad has a number of positives to draw upon.

Meanwhile, the Olympiques are looking to rebound from what has been a very trying start to 2019-20. An opening night victory over Drummondville represents their lone triumph of the campaign to this point. To say the ‘Piques have been hard luck losers would be, unfortunately, quite fitting. They’ve gone 0-6 in one and two-goal games to this juncture. However, the year hasn’t been without its bright spots, including strong starts from wingers Charles-Antoine Roy, Matthew Grouchy, Carson MacKinnon and Metis Roelens. The fourth overall selection in last June’s QMJHL Draft, Zachary Dean, has recorded four goals in his first ten games. With even the odd shift or bounce going a different way, the fate of this Gatineau squad could look quite different.

As they bounce up and down Autoroute 50 this weekend, which one of these two clubs will perhaps find the traction needed to ensure a smoother ride as the regular season rolls along? Given some of what we have seen thus far, the only safe bet would be to say that all bets are off.