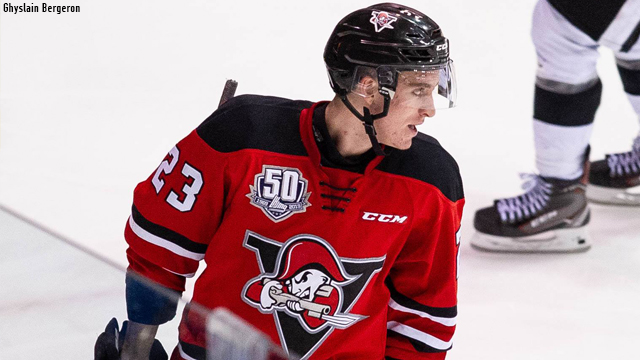 Toronto, ON – The Canadian Hockey League today announced that overage forward Gregor MacLeod of the Drummondville Voltigeurs is the CHL Player of the Week for the regular season week ending December 2 recording nine points in two games including four goals and five assists with a plus-minus rating of plus-6.

MacLeod produced a pair of multi-point performances last week helping the Voltigeurs remain one of the hottest teams in the country extending their winning-streak to six.  On Friday night he scored a career-high five points with one goal and four assists as first star of a 7-3 win over the Gatineau Olympiques, then scored a hat-trick plus an assist on Sunday afternoon as second star of a 10-3 win against the Blainville-Boisbriand Armada.  MacLeod now has points in seven-straight games while the Voltigeurs have climbed to third place in the QMJHL’s overall standings with a 20-6-1-1 record.

A 20-year-old from Dartmouth, NS, MacLeod is playing in his third QMJHL season and first with the Voltigeurs after beginning his career with the Charlottetown Islanders and finishing last season with the Quebec Remparts.  He’s currently tied for ninth in league scoring and second on his team with 38 points in 25 games which includes 17 goals and 21 assists.  He’s on pace to surpass his offensive production of a year ago where he scored 19 goals and 26 assists for 45 points in 54 games.

Also considered for the award this week was Vegas Golden Knights prospect Cody Glass of the Portland Winterhawks who scored twice with six assists for eight points in two games, and Dallas Stars prospect Jason Robertson of the Niagara IceDogs with three goals and seven assists for 10 points in three games.