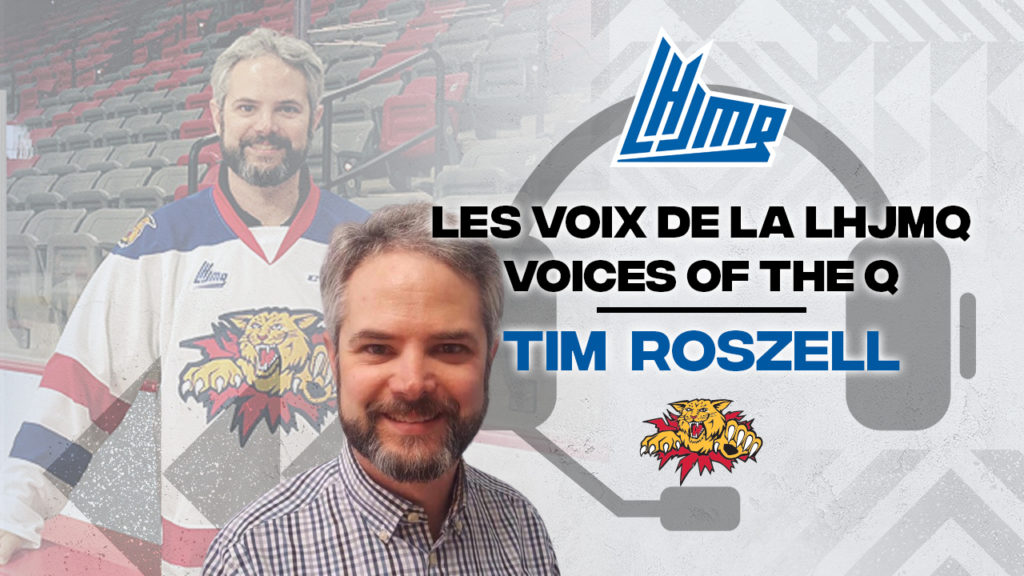 When Tim Roszell was a boy growing up in Chatham, Ontario, listening to sports on the radio fostered a lifelong love of both athletics and the dramatics of describing the action.

“Since we were so close to Detroit, we used to get a lot of Red Wings and Tigers baseball games,” Roszell explains. “I can’t count how many times I had those games on with my eyes closed while I was falling asleep and just picturing what was taking place with the legends like (Red Wings announcer) Bruce Martin and (late Tigers play-by-play man) Ernie Harwell that were describing the action. For me, it really goes back that far.”

A house league player in his youth, Roszell continued to gravitate towards the broadcast booth as he grew up. While at Fanshawe College, where he graduated in 2002 and helped run both campus and over the air radio stations at the school, he caught his first break thanks to his mentor and instructor, Jim Van Horne (not to be confused with the TSN anchor).

“Jim had received a call from the President of the Jr.B Strathroy Rockets, who said they were looking for a play-by-play guy,” he recalls. “This was before streaming. The Team President would record the games on a camcorder, transfer the video to DVD and then mail out the games to the parents of players. So, that was my start, with my microphone plugged into the Team President’s Handi-Cam.”

Following a stretch calling various games throughout Southwestern Ontario, Roszell set his sights on an opportunity on the East Coast with a newly founded talk radio station in Halifax. In the summer of 2006, after less than a year in Nova Scotia, an opportunity in the province next door changed everything.

“I had heard that our network of stations had picked up the rights for broadcasting Q games in Saint John, Moncton and Halifax, and that the position with the Sea Dogs was available,” Roszell remembers. “I went to my bosses right away, applied and… got the job!”

“I had all the boxes I’d packed to move from Ontario to Halifax all flattened in my storage room, so all I had to do was pack everything in them all over again,” Roszell continues with a laugh. “They were already labelled and everything.”

Broadcasting can be a nomadic profession, as that story illustrates. However, the manner in which Roszell took root in Saint John, a city he still calls home, was both rewarding and fulfilling.

Not only did he spend 12 seasons behind the mic in the Port City, he connected with Trish, the woman who would become his wife (“She’s been my rock”, Roszell says). Together, they’re raising two daughters from Trish’s previous marriage as well as their eight-year-old son. All the while, the Dogs – who captured three President Cups and a Memorial Cup during Roszell’s tenure with the team, which included five years as the club’s Communications Coordinator – provided him an even deeper extended family. 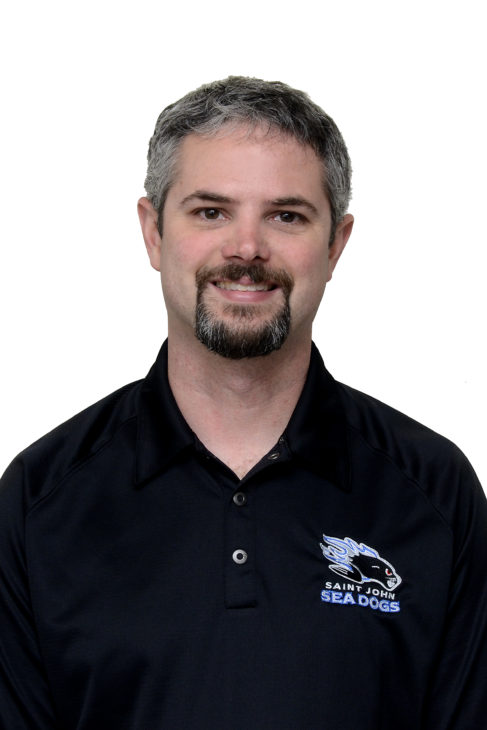 “The Sea Dogs organization treated me extremely well, right from day one,” he remarks. “I was made to feel like a family member. The vast majority of players that came through during my time were overwhelmingly kind and generous. To watch some of those kids grow from skinny 16-year-olds to full grown 20-year-old men was so gratifying.”

The timing of his hiring allowed Roszell the unique opportunity to develop with the club, which was entering its second season upon his arrival. Much like the players he described on the ice, he relied on the fans to motivate him and help shape his style.

“Very early on, I reached out to fans, finding out what they liked about the broadcasts, what they wanted me to change and, through that, I received a lot of very constructive feedback that allowed me to refine my approach to calling games,” Roszell explains. “I always appreciated that and how I was really taken in by the fans from the time I arrived in Saint John. That meant so much.”

That fan appreciation was never more apparent than in 2018, when a series of business decisions led to Roszell taking his talents up Highway 1 to Moncton, where he became the voice of the Wildcats. Sea Dogs fans, many of whom had known no other voice for their team, organized a petition to convince the team to reverse its decision.

“Some of the comments on that petition, saying what I meant to them, I have not been able to go back and read,” Roszell admits. “It’s just too hard. I really felt like I connected with the community.”

So how, exactly, did the transition to one of his former team’s biggest rival feel?

“Refreshing, actually,” Roszell says. “Honestly, it was easier than I expected. It was made a lot easier by the fact that the Wildcats were so welcoming to me. Upper management, coaching staff, training staff, players. It’s been such a welcoming environment. Right from the first game, it felt like I was supposed to be there.”

Today, when not calling the action for the Cats, Roszell freelances as a video journalist for Global TV. Still, fans in Saint John tune in. And not just to his TV work.

“There are some very loyal Sea Dogs fans that followed me to Moncton. Even though they’re not Wildcats fans, they want to listen. I find that very humbling. It’s actually something I have a bit of trouble wrapping my head around.”

As he recently closed the book on 16 successful seasons behind the mic in his adopted home province, Tim Roszell has earned so much; recognition, acclaim and, most importantly, a loving family.

He’s proven to be the example for which the next generation of announcers, listening in on their radios, would be wise to follow.