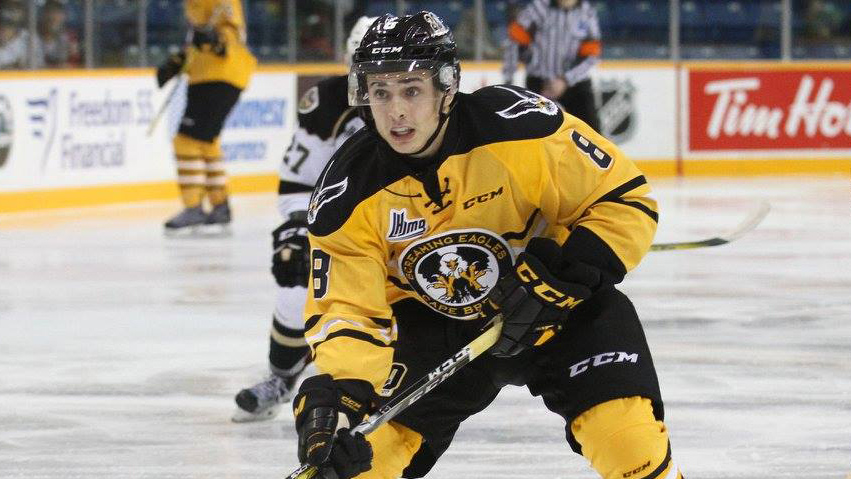 Junior hockey comes in cycles, and rosters turn over, sometimes at a rapid rate.  Such was the case in Cape Breton in the off-season, where last year’s club iced eleven 19 year olds and was due for major change.  But even teams in so called rebuilding processes will have a veteran presence, and with the Screaming Eagles the older core primarily resides up front.

While the battle for 20 year old positions raged on in well into October, Cape Breton could count on a trio of third year 19 year olds in its forward group- Dillon Boucher, Ty Fournier, and Phélix Martineau.  (In addition, the Eagles have Vasily Glotov, a first year import, and Yannik Bertrand, a second year free agent find, who would qualify for overage status next season.  On the backend, Tobie Bisson is the lone 19 year old.)

Of the three long term veterans up front, Martineau is the most likely to be counted on for offensive production.   Last year the native of Terrebonne, Quebec, had a breakout year, scoring 20 goals and collecting 23 assists.   There was no shortage of gifted offensive players to play with, but ice time could be tough to come by behind stars like Pierre-Luc Dubois, Michael Joly, Evgeny Svechnikov and Max Lazarev.

In addition to his 20 goal form, Martineau is well established as a player who can play 200 feet.  While some effective scorers have to work on shoring up the defensive side of their game, this third year forward brought a defensively responsible game when making the jump to the QMJHL.   He’s also proven to be an effective faceoff man, going over 50 percent on the draw during the 2015-16 season.

Screaming Eagles coach and general manager Marc-André Dumont has said that Martineau is the type of player you can fit on any line.   This year with a younger roster, he’s had his chance to play in more of an offensive role, playing on the top line with the likes of Fiore, Carozza, and Glotov.   (Martineau did have to wait to come back into the lineup as he was serving the final two games of a suspension that carried over from last year’s playoffs.)

Standing at 5’9, the man wearing #8 in Sydney may have trouble getting attention from the pro scouts but his game has proven to be well suited to junior.  Some Cape Breton fans have pencilled Martineau in as a future captain.  The Eagles have received fair value for the skater they chose with the 83rd (fifth round) choice in the 2014 QMJHL entry draft.

One year prior, in the 2013 draft, the Screaming Eagles used the opening pick in round seven on Dillon Boucher.  He didn’t make the club for the 2013-14 season, but it was a productive year as the then-future Eagle would named to the second all-star team of the Nova Scotia major midget league, as his Halifax MacDonalds would go on to the Telus Cup.

Boucher’s first year in 2014-15 would prove tumultuous and miraculous, shining a light on things far more important than any game of hockey.  First he suffered an injury at the most bizarre time- breaking his ankle after celebrating his fist career goal, and sidelining him for two months.   But despite not playing for some of the month of November, Boucher’s game off the ice was still strong- he led all Canadian Hockey League players in Movember fundraising with $1,517.

A month later the Boucher family was dealt a devastating blow when Dillon’s father, Brad, suffered an aneurysm after having a surgery to remove pancreatic cancer.  The elder Boucher, who had coached his son throughout the years, was in a coma an on life support.  But in what could be described as a Christmas miracle, Brad opened his eyes and would recover.  Nine months later he was out of hospital and has now returned to seeing his son play in arenas around the Maritimes.

Dillon’s whirlwind rookie season came to an end with one of the more memorable goals of his career.  He scored in overtime in game six of the Eagles’ first round showdown in Quebec against the Remparts.  Cape Breton would drop game seven, but coming off a three goal regular season, Boucher had established himself as an unlikely hero.

His totals would increase to ten goals in 2015-16.  While he’s capable of chipping in offense, Boucher’s real calling card thus far is his physical play.  He’s not afraid to drop the gloves and when you look at the boxscore at night’s end he’ll often be a team leader in hits.

Physical play can also be an attribute of Jordan Ty Fournier, who came to Cape Breton in the summer of 2015.  The deal sent defenseman Brad Lalonde, a close friend of Fournier’s, to Victoriaville.  Dumont describes the now third year winger as a power forward.

Like Boucher, Fournier was taken in 2013 draft- 24th overall in the second round- and returned to midget for another year.  After producing at over a point a game in his final midget campaign.  After collecting 22 points in 55 games, the younger brother of former QMJHLers Dillon and Stefan Fournier was moving east to the Maritimes.

Unfortunately for the youngest brother, puck luck did not seem to follow him in 2015-16.  He averaged close to two shots a game in his first year in Cape Breton but finished with just six goals thanks to a shooting percentage of 5%.  Those familiar with advanced metrics would know that number is unlikely to repeat itself, so serving as a veteran with the Eagles Fournier could experience a resurgence at 19.

His play starting the 2016-17 season would certainly indicate that.   Fournier averaged a point a game through his first eight contests and was named one of the three stars three times in his opening five games.   The lineup sheet may list Fournier, Bertrand and Declan Smith as a fourth line- but that doesn’t reflect their importance or even playing time.

As Fournier, Boucher, and Martineau continue their QMJHL careers, they’ll look forward to competing for 20 year old spots and perhaps opportunity in university hockey or a shot at the pros.  For now they’ll continue to contribute in Cape Breton and ensure the Screaming Eagles can compete on any night.