Under the Microscope | QMJHL Prospect of June: Ethan Gauthier 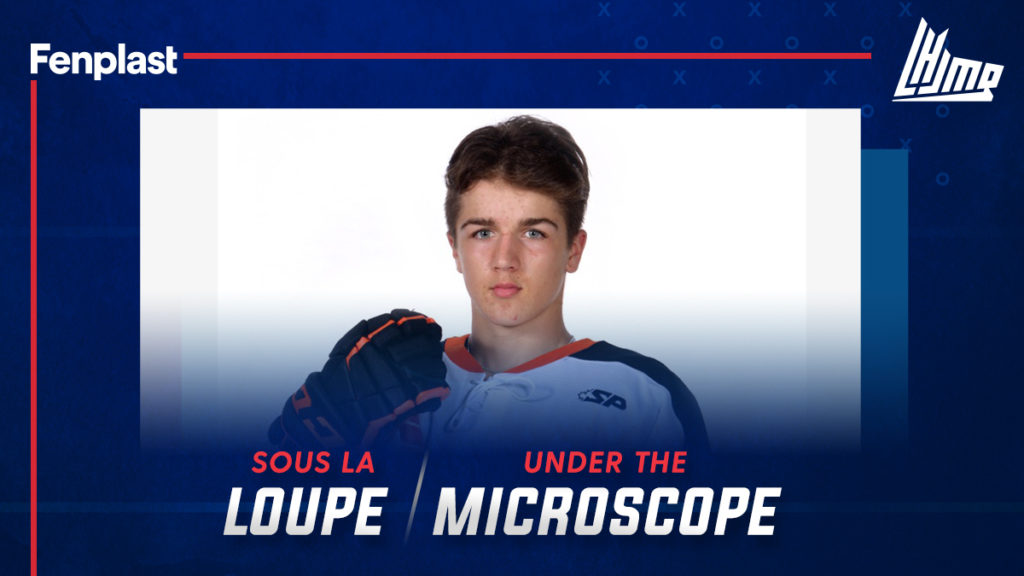 Ethan Gauthier goes about his business quietly. That is because the soft spoken 16-year-old does all his talking on the ice.

Even though there weren’t any games played in the Quebec Midget AAA ranks due to the pandemic this past season, the highly touted prospect remained the talk of the town around the QMJHL.

In a year with so much uncertainty, the one constant all season long has been Ethan Gauthier’s draft status. The QMJHL Central Scouting Department’s final prospect rankings show Gauthier at the top of the 2021 class, meaning that he is the clear-cut favorite to be selected first overall on June 25.

“It’s really special to see my name up there. There are a lot of good players on that list and I don’t take nothing for granted”, admitted the Magog Cantonniers forward. “This season wasn’t easy for anyone. We have not played a single game since last March, so for sure it was tough mentally.”

“We expected a season at the beginning, so it was really hard mentally not having the chance to play a single game with our group of guys,” Gauthier added. “But everyone was in the same situation, so I think there’s no excuse for us and we just need to get ourselves ready for next season.”

Despite the lack of game action, the elite level forward tried to make the best out of an extremely difficult situation over the past year.

“Having the chance to be coached by Félix Potvin in Magog allowed me to improve parts of my defensive zone game”, he said. “Obviously, it’s unfortunate not having the chance to play a real season in my QMJHL Draft year, but I think we should only look at the positives and try to control what we can control.”

A 5’10’’ and 167-pound elusive center, Gauthier plays the game the right way in all three zones. His skill, creativity and natural offensive instincts jump off the page, making him a lethal threat every time he steps on the ice.

The pressure and high expectations of being rated as the best prospect amongst his peers has not seemed to phase Gauthier at all. He remains fixated on his lifelong dream to play in the QMJHL and beyond.

“I don’t think [the draft] added pressure this year. I just feel that I am ready to get to the next level and I just keep pushing as hard as I can to be the first one named at the draft”, stated the Drummondville native. “It would mean a lot to me to be recognized as first overall after all the effort and sacrifices I’ve been putting in for so long.”

While living up to others’ expectations can be extremely difficult for anyone, it is especially true when you are the son of a former NHLer. Ethan’s father, Denis Gauthier, was a first round draft pick of the Calgary Flames in 1995 before he went on to play in over 500 games at hockey’s highest level.

Father, coach and mentor, Denis Gauthier certainly did it the right way when it came to the game of hockey.  He and his wife Stephanie have kept all their children grounded and humble throughout their journey in life and sports.

But hard work, dedication and an unwavering passion for the sport runs in the Gauthier family. And while forging his own path in the game is one thing for Ethan, having the unwavering support of his family is another.

“My dad has always been there for me since day one. He’s been such an inspiration for me”, said the teenager. “All the advice he provides makes me a better player and person.”

“I wouldn’t be where I am today, without my family”, added Ethan. “They have always been there, and they did everything they could to give me all the chances in the world to get where I am today. Words can’t describe how grateful I am for that.”

Gauthier’s older brother Kaylen, a three-year veteran of the QMJHL with the Drummondville Voltigeurs, has also played an instrumental role in his development both on and off the ice.

“Kaylen has been a big part of my success. He’s been a role model for me in every aspect of my life”, said the younger brother. “He pushes me every day on the ice and in the gym, which means everything to me.”

In the last regular season in which he played in, Ethan Gauthier ripped up the Quebec Bantam AAA ranks by registering 13 goals and 27 assists in only 23 games as an assistant captain of the Bois-Francs Cascades.

Since then, QMJHL scouts have had to analyze countless hours of video footage and contact many people close to Ethan to learn more about the talented prospect. The result is: you have to speak with numerous scouts before finding one who has something bad to say about Gauthier’s game.

“Ethan plays a lot bigger than his stature,” said one QMJHL scout. “He’s a good playmaker and has a good touch around the net. He is the type of player every coach loves to have on their team.”

“He’s very solid on his skates and plays the game with a lot of power and intensity”, added the longtime scout. “Ethan possesses all the tools to quickly become an impact player for the team that will select him.”

There is no denying that Gauthier is anxious to get his career started in the QMJHL. He’s ready to prove that he can have an impact in the league, just like one of his favorite players has been doing at the NHL level.

Even with all the attention surrounding his pre-draft ranking and status, Gauthier understands that the real work starts once the entry draft has passed.

“I’m expecting an adaptation period after not being able to play in a year and a half. But I think [I’ll be able to] contribute offensively and be responsible defensively”, said Gauthier about how he sees himself fitting in at the QMJHL level.

“Looking back to when I first started playing up until now, and looking at all the sacrifices I’ve made, I’m excited that my draft year is finally here”, he added. “I’ve been following the QMJHL since I was five years old. I’ve been waiting for my time to play in the Q for so long!”

Luckily for us, the wait is almost over before Ethan Gauthier can start making noise again.