Under the Microscope | NHL Prospect of March: Thimo Nickl 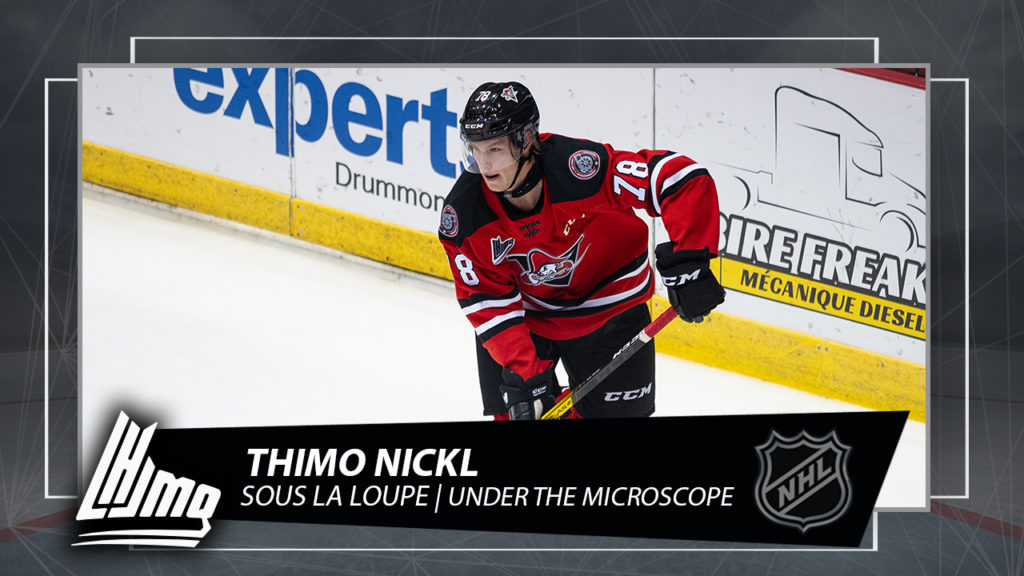 There are over 6200 kilometers between Klagenfurt, Austria and Drummondville, Quebec. That’s the distance Thimo Nickl had to travel in order to try and turn his dreams into reality.

The highly skilled defender has flourished in his first full season in the Quebec Major Junior Hockey League and he doesn’t shy away from admitting that he has his sights set on the NHL.

“Honestly, I didn’t expect it would of went that good right from the start,” confessed Nickl. “I have great team players with me, players that helped me from the beginning on. We are a good team, so it was easy for me to adapt to Canada. I’m more than happy to be here,” he added of his time in Drummondville and the QMJHL.

The 6’2’’, 176-pound, defender has excelled playing the North American game for the first time in his career. As a matter of fact, he finished his rookie campaign with 10 goals and 29 assists in 58 games for the Voltigeurs.

“The biggest thing for me was [adjusting to] the smaller ice and the speed of the game,” Nickl said of his first year in North America. “They play the body more here in the QMJHL, but the speed and the ice were definitely the two largest aspects [to work on] for me.”

Nickl’s ability to read the play and his gap control are simply outstanding. He was a key difference maker on the Voltigeurs blue line, logging significant minutes in every situation for Steve Hartley’s crew.

The humble kid from Austria has embraced every step of his journey and he is driven to play at the next level. Despite the dream, he needs to keep improving in order to make it come true.

“Skating is a big part of my game that I have to continue to work on,” he admits. ”I have gotten better over the last few years, but there’s still room for improvement there.” 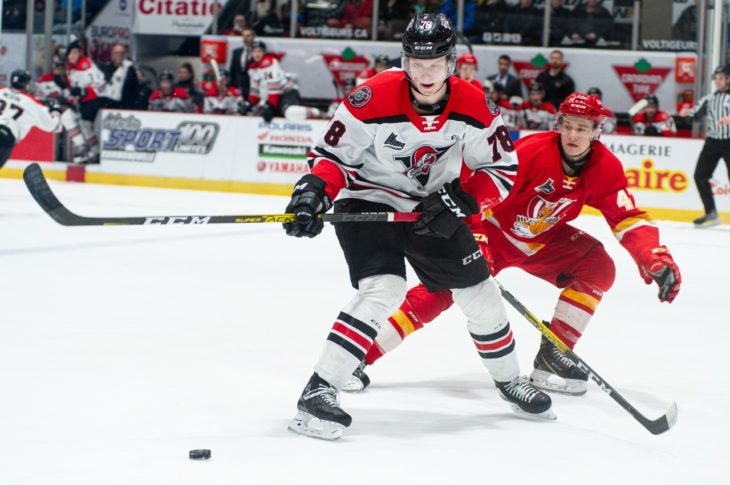 But progress is something Nickl is familiar with, and he is quick to credit Hartley and the entire Voltigeurs coaching staff for his early success in the QMJHL.

“They tell me every day to just play simple and not to complicate things,” he says. “They ask that I play the puck quickly and jump into the rush to get as much offense as possible.”

For those reasons and more, Nickl’s play on the Voltigeurs’ speciality teams has been truly exceptional this season. He finished the season with 19 power plays helpers, third most among all Q blueliners.

It’s not surprising considering the Austrian possesses an outstanding shot from the blue line and has tremendous vision, patience and poise with the puck.

So where does the soft-spoken defender see himself fitting into the next level?

“I want to be a two-way guy. I have to say that I’ve only put up points this season because of the players I’ve played with,” Nickl admitted. “I just give them the puck and they do what they do,” he added with a laugh.

“I do see myself as a two-way defenceman. So, I can play on the backend, and offensively, I can show what I’ve got when needed,” states Nickl.

Arguably one of the best imports in the QMJHL, Nickl also possesses one of the best shots in the entire the circuit. As far as his shot is concerned, how has he managed to make it so devastating?

Unwavering passion, drive and determination to reach his dreams, that’s Thimo Nickl. And that’s the player he wants NHL teams to reach for in the next entry draft.

“It would unbelievable to get drafted”, he says. “Especially coming from Austria, the NHL seems so far. But now that I’m here, things seem to be getting closer and closer. I’ve been working toward this for years now, so hopefully I can hear my name,” confessed Nickl.

While he will need to work on his explosiveness over the summer to gain some quickness in his first few strides, it’s clear Nickl has all the makings of a very solid pro blueliner for years to come.

“Thimo is a solid two-way defenseman that brings a good puck game and a physical element,” said one NHL scout. “He has good size and uses it well. He defends well with his stick and body position. He’s a strong skater with good mobility and agility.”

“Thimo has a big point shot and can really move the puck,” said another NHL scout. “His decision making can be an issue at times, but he plays hard and can defend extremely well,” the scout added.

After traveling from Austria to Canada to make his NHL dreams come true, all that’s left to hope for is that Nickl’s next stop will be in an NHL city he can call home for years to come.