Under the Microscope | NHL Prospect of February: Jeremie Poirier 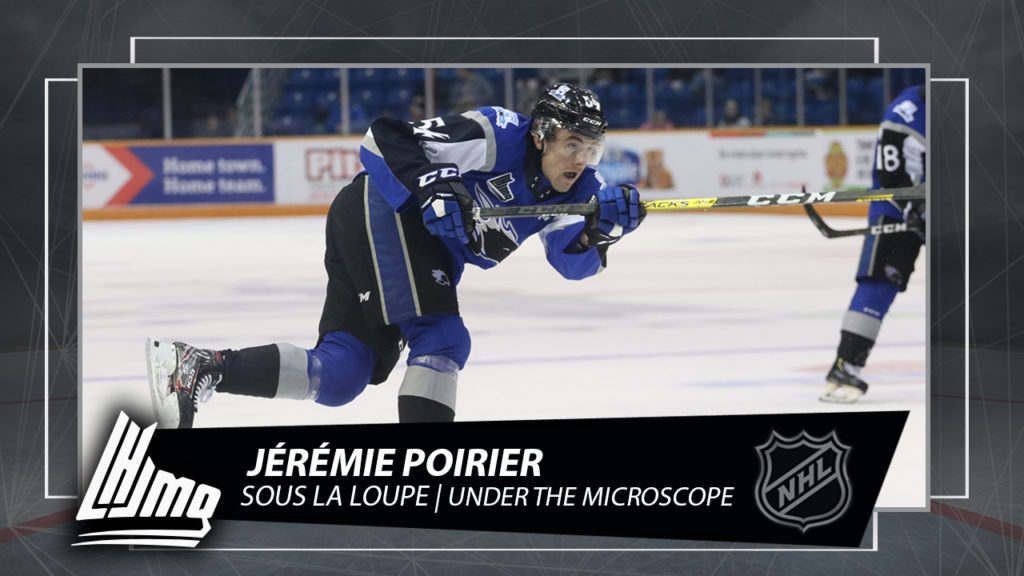 Projecting is hardest aspect of the job for NHL scouts. The art and science of scouting epitomizes risk or reward on so many levels. As a plethora of NHL scouts converge on the Port City of Saint John, many are taking the latter approach when it comes to Jeremie Poirier.

The Salaberry-de-Valleyfield, Quebec product is a natural when it comes to being an offensive defenseman. The highly skilled defender possesses terrific puck skills and offensive instincts. Poirier continues to quarterback the Sea Dog’s power play and should continue to put up massive point totals in the second half of the season.

As a matter of fact, when Poirier netted his 16th goal of the campaign at the end of January, he broke a Sea Dogs franchise record for most goals scored by a defenseman in a single season. And there have been some tremendous blueliners that have pulled on that team’s jersey.

“There are a lot of things going on right now and I think I’ve handled them all pretty well,” said Poirier of the stress and pressure that come during an NHL Draft year. From playing in the Kubota Top Prospects Game and in the CIBC Canada Russia Series, to logging massive minutes with the Sea Dogs, Jeremie Poirier has experienced it all this season.

“The Sea Dogs’ season is the most important,” confessed Poirier. “I’m just trying to do well when I play here, and help the team win. That’s the best way to approach [my draft year].”

Poirier is an exceptional skater, has a solid first pass and possesses a truly dynamic release. The kid can really fire a puck. But Poirier is the most dangerous in open ice, when following up or jumping into the play. Nevertheless, he has scored from all over the ice this season.

The talented defender will need to work on moving the puck quicker in order to be more effective at the next level. While Poirier’s offensive skills are undeniable, and bordering on the elite level, so perhaps the young defenseman’s toughest challenge will be convincing NHL scouts that he can be an effective defender at the next level. Will the young defender sure up the defensive side of his game to become a truly complete player?

“If you want to play in the NHL one day, you can’t just play offensively,” confessed Poirier. “You have to be good in both zones. I know I’m not going to be a huge penalty killer in my life, but if I can work on my defensive game and keep improving that aspect, it will definitely help me in my future.”

There’s no doubt that tons of NHL Scouts will continue to converge on the Port City to evaluate the talented defender’s progress. The opportunity to play in front of NHL scouts and potentially accomplish his lifelong dream of being drafted and play at hockey’s highest level isn’t lost on the 17-year-old.

“It would be the best day of my life,” Poirier said of potentially hearing his name called in Montreal next June. “I’m really looking forward to the draft. If I can just continue to play my game, and have some fun out there, then I feel like the best is yet to come.”

Poirier and the Sea Dogs have faced a lot of adversity over the last two seasons. How has that adversity helped him as a player and person?

“You just learn from it,” explained Poirier. “You have to grow from it too. All the guys that are back this year have all experienced those tough times, so it’s good for us to learn from all those things and know what we did wrong last season. Then we can try to improve this year, and play better.”

Poirier has met with over twenty NHL teams to date. We asked him what that experience has been like, and if he ever thought he would find himself in a similar situation?

“It’s been surreal, but you don’t really think about that stuff,” he admitted. “Looking back on it, I never thought I would be here one day. I’m living in the moment right now, so I’m just enjoying it, taking it day by day and we’ll see what happens later this year.”

Through it all, Poirier has tried to take all the excitement and new experiences in stride.

“It’s a chance and opportunity for me to show how good my game is and try to go out there and play my best.  I go out there and work on things that I need to work on, to show people what I can do on the ice and my strengths.”

In 59 games with the Sea Dogs, Poirier is tied for the league lead among defensemen with 18 goals this season. His 49 points have him in a tie for fourth place among the top scoring blueliners, five points behind his teammate William Villeneuve.