Under the Microscope | NHL Prospect of December: Cole Huckins 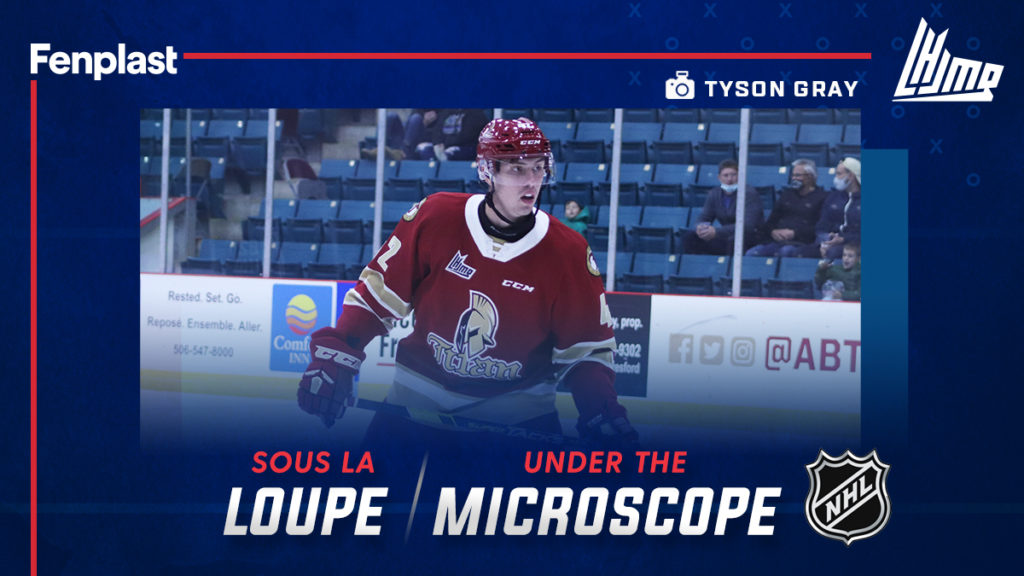 Comparisons, projections, and trajectories. Three aspects of the hockey world that are totally out of a player’s control.

“Control what you can control” might sound cliché, but Cole Huckins has lived by that motto his entire career.

The skilled forward from Fredericton, New Brunswick is coming off a solid rookie campaign for the rebuilding Acadie-Bathurst Titan, one in which he scored 13 goals and added 25 assists in 64 games.

With his size, speed, play-making ability and scoring touch, Cole Huckins can really do it all. At 6’3’’ and 200 pounds, all signs point to the Titan sophomore being an effective power forward at the next level. But with high expectations and projections, come pressure and attention.

While the latter can become crippling for most teenagers, they certainly have not derailed Huckins’ production. If anything, they have enhanced it. The seventeen-year-old has picked up right where he left off last year – registering seven goals and 12 assists in only 15 games for the third place Titan this season.

“Honestly, I’m just really looking forward to it. It’s something that I’m going to share with my family,” said Huckins when asked about the upcoming NHL Draft. “Sure, it’s in the back of my mind, but right now I’m just focusing on trying to win every game and try to progress every day on the ice.”

Control what you can control, right? However, in the young prospect’s case, a decision made by his coaching staff is what seems to have tremendously helped him elevate his game this season.

Huckins played through the middle a year ago, but now finds himself on the left wing. From set-up man to sniper, a move to the wing might be exactly what he needed to draw even more attention from NHL scouts.

At times last season, Huckins looked like a young Joe Thornton, setting up his teammates with unbelievable passes from the center position. His puck skills and vision are definitely some of his strongest attributes, but a move to the wing has also revealed a grittier more hard-nosed side to his game. 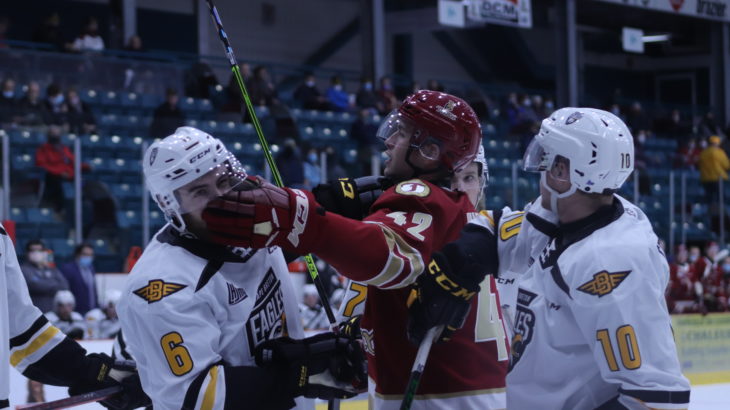 “Cole is a good-sized forward, sees the ice well and possess good puck skills,” said one NHL scout about the young prospect. “He has quick hands for his size and can make plays. He is at his best when he’s physically engaged and goes hard to the net.”

“His skating needs some work, with speed and acceleration being the key areas”, added the scout. “I would also like to see him up his compete level at times and be more consistent in that area.” While he considers himself still a raw prospect that’s eager to learn, Huckins remains humble, and knows that he still has many areas where he can improve his game.

But do not doubt the sophomore, as he’s been passioned by the game since day one. Hockey was a way of life for the Huckins’ family. For Cole, the dream to play in the National Hockey League started on a frozen pond, in the harsh New Brunswick winter.

“I guess my earliest recollection of the game was playing on the pond with my mom and dad,” he remembers. “One of my first memories was trying to stop on my left foot,” he added with a smile.

Growing up, the young power forward did not have to look too far for inspiration when it came to NHL players from his neck of the woods.

“I really like how [fellow New Brunswicker and Titan co-owner] Sean Couturier plays the game, as well as my cousin, Brad Malone, who grew up in Miramichi”, says Huckins. “Brad has been there for me throughout the process, I have bounced a lot of ideas off him, which has been really nice.”

Malone has played in nearly 200 NHL games over his career and has been a member of the AHL’s Bakersfield Condors for the past four seasons, so he knows a thing or two about steering Huckins in the right direction.

What about other NHLers who Huckins models his game after?

“I really like Patrice Bergeron and Jonathan Toews”, he admits. “Those guys are two-way players. They play in every situation, at any time. I like the idea of being able to play like that.”

And what about the Joe Thornton comparisons?

“I do like Jumbo Joe,” added Huckins. “I think he sees passing lanes that a lot of players don’t. To be a guy his size, and to have that much skill, it must be nice.” 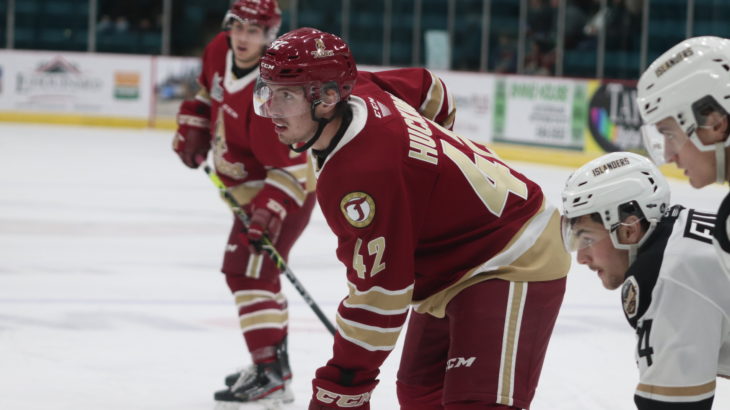 The Acadie-Bathurst Titan have surpassed all expectations in 2020-2021, heading into the Holiday break with a solid 9-4-1-1 record. The team’s coaching staff has done a fantastic job getting the most out of the dynamic young team.

Huckins is a big part of the squad’s nucleus and subsequent success.

“It’s really exciting to be part of the core group of this team. Last year was a tough year, but everyone feels like we have turned the corner and I’m really optimistic about the rest of the season,” he said. “I think we can surprise a lot of teams and keep rolling as a young core.”

While some high-end prospects have gone through the motions of an NHL Draft year on their own, it certainly is not the case with Huckins.

Behind the bench, Mario Durocher counts more than 1000 games of experience in the QMJHL and has pretty much seen it all. As for Huckins’ teammate Riley Kidney, the forward is also dealing with the pressure of being in his NHL draft year.

“Riley and I talk about it every now and then. It was something special to grow up playing against each other and now to be playing together,” admitted Huckins. “And it’s an even more special feeling to have a teammate going through [his draft year] at the same time as you.”

Hockey dreams are often shared, just like most of the sacrifices along the way. Those challenges and sacrifices certainly are not lost on the shy kid from Fredericton.

“Ever since I was a little kid, I’ve always loved the game. Obviously, I have those surreal moments when I think about getting drafted,” Huckins said when asked about what it would mean to him and his family should his name be called by an NHL franchise.

“The closer the draft gets, the more it feels real, and the more I get excited about it. I’m just going keep trying my best until we get there”, he smiled.

From the pond to the pros, Cole Huckins’ dream of being drafted into the National Hockey League is within reach.

And as they say: control what you can control, the rest will take care of itself.