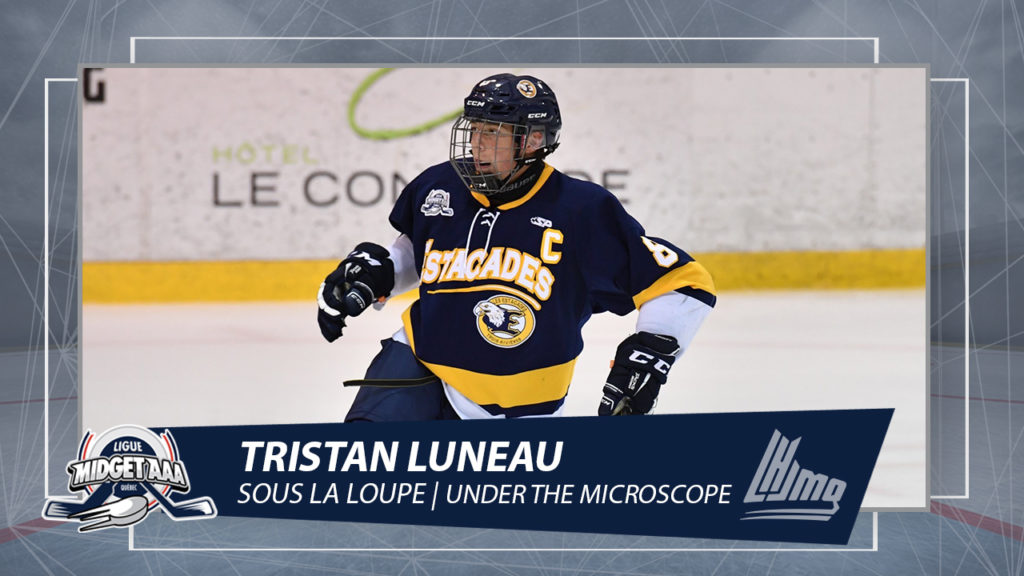 If we’ve been accustomed to seeing the QMAAAHL develop solid forwards in recent years, it’s a blueliner that is garnering most of the attention this season. Tristan Luneau, who plays for the Trois-Rivières Estacades program, is turning heads in every rink he visits across the province.

After a first season in the QMAAAHL as a 14-year-old, Luneau returned to the Estacades for his sophomore campaign with one goal in mind: becoming a better defenceman.

“My first objective was to fine-tune every aspect of my game in order to be better prepared for the next level. One of the most important elements for me was to become a leader, both on and off the ice. I want to lead by example in every game”, he says.

It’s no coincidence that the Estacades’ blueliner wears jersey number 8. After sporting number 4 during his rookie season, the Trois-Rivières native switched to number 8 in honour of his favourite player: Drew Doughty. Luneau admits his actions on the ice are greatly influenced by the Kings’ star defender and his playing style.

“I have always admired Doughty. What I love the most about him is the importance he puts on both his offensive and defensive game. He is a true role model for me”, he says.

Despite already being approached by some American colleges, Luneau has definitely not shut the door on playing in the QMJHL. School is extremely important to him, and must be an integral part of the next chapter of his hockey journey.

Speaking of this future decision, the Estacades captain did share his thoughts on some of the great elements he appreciates from the Q.

“Of course, [QMJHL] teams are located closer to my family and it’s much less complicated for me to play here”, he admits. “The QMJHL is a super-competitive league and offers great visibility to its players. That’s why I’m definitely not setting that option aside for the time being.”

I had the opportunity to see Luneau play in a few games and what impressed me the most was his confidence with the puck. We can easily see that he’s a young defender who does not hesitate to put all the necessary efforts to improve his skills.

I saw him play as a 14-year-old and again this season, his progress is striking. He has really integrated Drew Doughty’s good habits to his own game and, in full disclosure, Doughty is also my favourite player. So, I can attest about all the similarities in their style of play!

Luneau was the talk of the town at the recent CCM Midget AAA Challenge thanks to his strong showing.  A scout even went as far as saying that Luneau was possibly the most complete player, on an international scale, of all the 2004-born defenders he saw this season!

Luneau is very cerebral on the ice and he rarely has to force anything. He is always poised when in possession of the puck and sometimes completes amazing plays in situations where most defenders his age would have failed.

As cliché as it may sound, he is the type of player that gives you the impression that playing hockey is easy. He is self-confident and makes decisions based on his abilities. It is the reason why he does not have to overplay and that everything comes so naturally to him. In that sense, he reminds me of Charlie McAvoy of the Boston Bruins.

Tristan Luneau is certainly one of the best defenders the QMAAHL has produced in recent years and I strongly believe he will accomplish great things in hockey.