Drummondville Voltigeurs player of the week xavier simoneau
by
LHJMQ/QMJHL 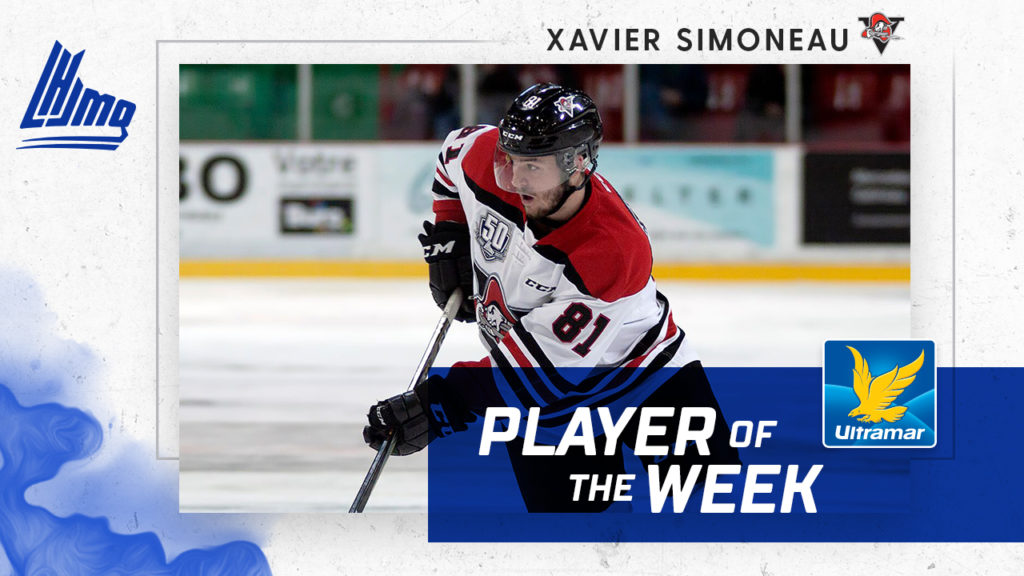 The latest Ultramar Player of the Week honors are awarded to Drummondville Voltigeurs center Xavier Simoneau. In three games, the 18-year-old from Saint-Andre-Avellin, Quebec scored three times and added seven assists as the Volts continued on their early season win streak.

On Wednesday night at home, Simoneau potted his third goal of the season – a shorthanded, game-winning tally – and added an assist in Drummondville’s 4-2 truimph over the Blainville-Boisbriand Armada. For his efforts, the third-year forward was named the game’s first star.

Simoneau would once again earn first star distinctions on Saturday afternoon in his club’s 5-3 victory over the Baie-Comeau Drakkar. This time, he would factor in all of the Voltigeurs’ scoring, finding the back of the net once and adding four assists.

Finally, on Sunday afternoon, Simoneau took his offensive show on the road, scoring a goal and adding a pair of assists in Drummondville’s 6-2 win against the Olympiques. The victory extended the Voltigeurs win streak to five games while Simoneau also saw his personal point streak stretched to five games.

A first-round selection of the Voltigeurs in the 2017 QMJHL Draft, Simoneau has recorded 17 points in 10 games this season, good for a tie for fifth in league scoring entering this week’s action. He has been held off the scoresheet just once so far this year. Simoneau was an invitee to NHL training camp with the Toronto Maple Leafs last month.