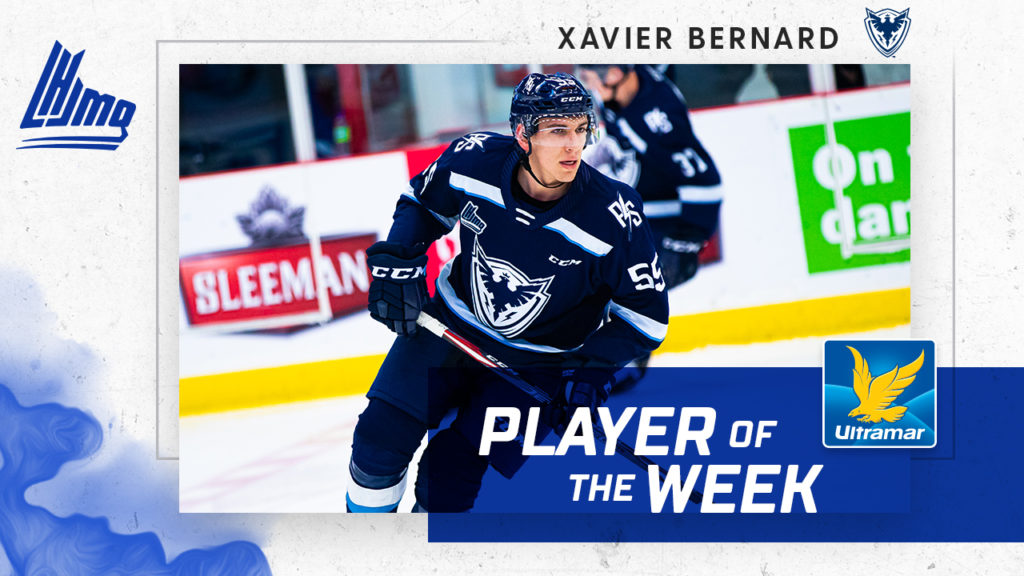 The latest Ultramar Player of the Week is Sherbrooke Phœnix defenseman Xavier Bernard. In three games, the Mercier, Quebec native, who turned 20 on January 6th, scored once and added five assists as the Phœnix continued its latest win streak.

On Wednesday night at home, the club emerged on the right side of a 2-1 decision over the Blainville-Boisbriand Armada. Though he finished the game without a point, Bernard was a difference maker in the contest regardless, recording a +2 rating on the night.

The fourth-year veteran would not be denied from hitting the scoresheet on Saturday afternoon in Val-d’Or. Bernard opened the scoring with his first goal in a Phoenix jersey early in the first frame. He would add four helpers to finish the night with five points, equalling a Sherbrooke franchise record for points in a game by a blueliner. He would also be named the first star of the contest, a 9-4 triumph for the Phœnix over the Foreurs.

On Sunday afternoon in Rouyn-Noranda, Bernard would register an assist in a 4-3 victory over the Huskies. The helper came on a key third period tally which would help vault the Phœnix to its 11th straight win and 49th overall, extending that pair of franchise records.

Acquired from the Charlottetown Islanders on December 15th, Bernard has posted 16 points in 27 games since joining the Phœnix. Overall, he stands with 28 points in 60 games, putting him within striking distance of his career high of 35 points, set with Drummondville in 2017-18. Bernard was selected by the New Jersey Devils in the fourth round of the 2018 NHL Entry Draft.