Phoenix player of the week grégoire
by
LHJMQ/QMJHL 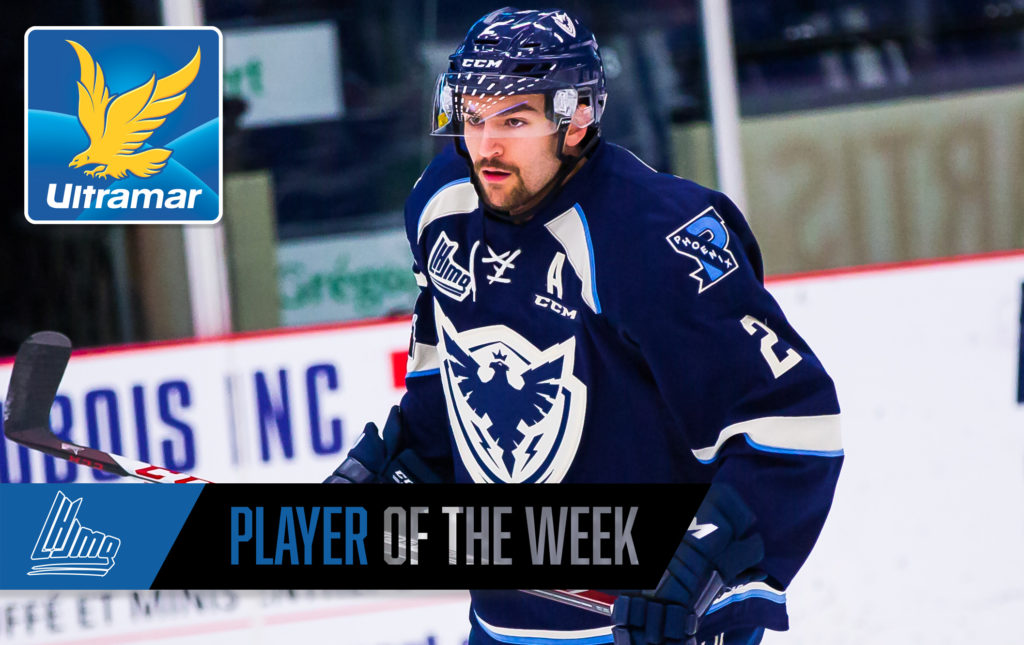 Boucherville, Que. – The Ultramar Player of the Week is defenceman Thomas Grégoire (Phoenix | Sherbrooke) who excelled with three goals and three helpers over the three games he played in the past week.

Thanks to this recent streak, Grégoire has climbed to the highest rank of the Q’s top scoring defencemen after having piled up 5 goals and 22 helpers over the 26 games he’s played up to this point in the season.

Grégoire’s last three outings were phenomenal; on top of the points he amassed, the blueliner fired no less than 23 shots on goal and maintained a +5 differential, the latter being largely thanks to the fact that he wasn’t on the ice for any even strength goals scored against the Phoenix.

Playing in Gatineau on Wednesday night, Grégoire lifted his squad to a 5-4 win by scoring two goals, including the game-winner in overtime, and collecting two assists. It was his second four-point outing in the QMJHL.

On Saturday, the Sherbrooke native picked up an assist and fired seven shots on net in a 4-1 win over the Foreurs. It is to be noted that Grégoire also helped the Phoenix defensive squad establish a new franchise record by limiting Val-d’Or to only 10 shots in the game!

Grégoire ended his week by scoring the game-winning goal in a 2-1 victory over Rouyn-Noranda on Sunday.

Other players considered for the Ultramar Player of the Week were rookie forwards Alexis Lafrenière (Océanic | Rimouski) and Xavier Simoneau (Voltigeurs | Drummondville). Lafrenière was dazzling for the Océanic, scoring six of his team’s 11 goals over the past week and adding an assist to the mix. Simoneau was equally as good, he totaled fours goals and three helpers in three games played, including both goals in a 2-0 win over the Huskies on Saturday.