Sherbrooke Phoenix samuel poulin player of the week
by
LHJMQ/QMJHL 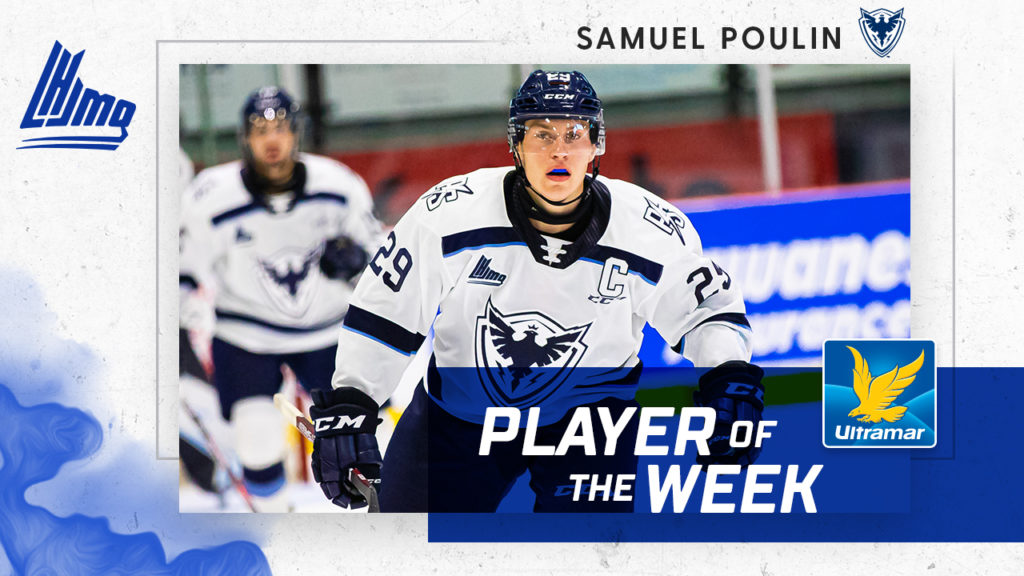 The latest Ultramar Player of the Week is Sherbrooke Phoenix winger Samuel Poulin. In three games, the 18-year-old from Blainville, Quebec scored six times and added six assists as the first-place Phoenix went a perfect 3-0.

On Monday afternoon at home, Poulin gave the Phoenix faithful something to be thankful for by firing home a pair of goals – including the eventual game winner with just one second remaining in the first period – in the club’s 5-1 triumph over the Victoriaville Tigres. For his efforts, the third-year veteran would earn first star honors for the contest.

On Friday night, once again at home, Poulin tallied another pair of goals as the Phoenix started their home-and-home Rivarly Weekend series with the Shawinigan Cataractes on the right foot, taking the game by a score of 4-2 in a battle between two of the top clubs in the Western Conference.

Poulin would save his best for last, however. On Sunday afternoon in Shawinigan, the Phoenix captain would set new franchise records for most assists (six) and points (eight) in a single game in his squad’s 9-4 victory over the Cataractes. It also signifies the first eight-point game by any QMJHL player in ten years. This remarkable performance gives Poulin, who was named the game’s second star, five straight games with multiple points while the Phoenix have extended their winning streak to seven games.

Poulin became the first QMJHLer selected in the 2019 NHL Entry Draft when the Pittsburgh Penguins grabbed him with the 21st overall pick. Since returning from Penguins camp, he has recorded 22 points in 11 games, good for a tie for sixth in the league scoring derby. This past week’s scoring outburst has also made Poulin a point-per-game player for his QMJHL career thus far. He currently sits with 143 points in 133 regular season games.