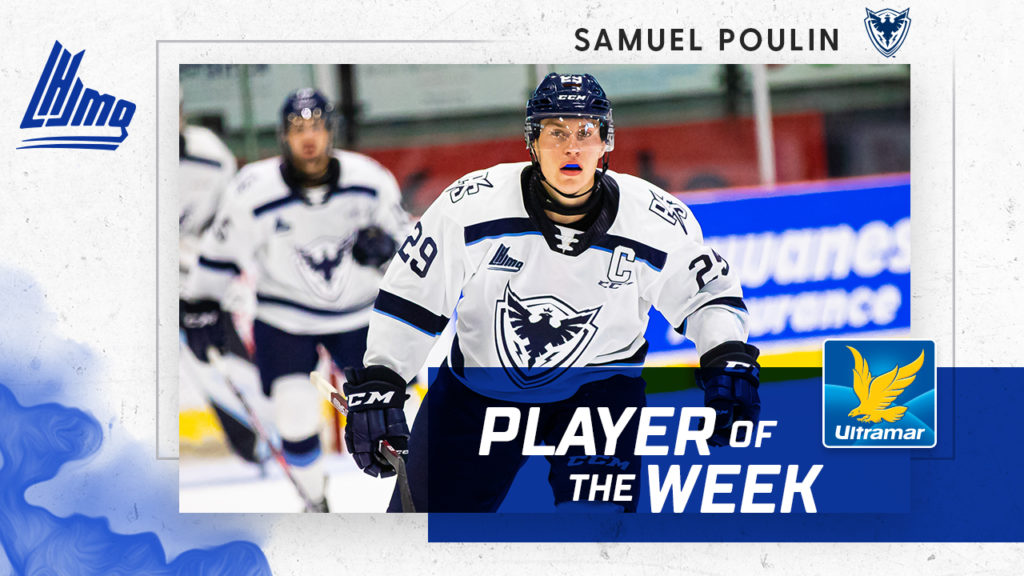 The latest Ultramar Player of the Week is Sherbrooke Phoenix winger Samuel Poulin. In a pair of home games, the 18-year-old from Blainville, Quebec registered five goals and added three assists as the Phoenix strengthened their hold on first place in the overall standings.

On Friday night, the Phoenix captain fired home the eventual game-winner midway through the first period and just kept on scoring from there, finishing the game with four tallies and an assist in Sherbrooke’s 10-1 triumph over the Acadie-Bathurst Titan. For Poulin, who was named the first star of the contest, this was his first career four-goal game, which also tied a Phoenix franchise record.

On Sunday afternoon, Poulin was back at it against the powerful Chicoutimi Sagueneens. Again, he would notch the game-winner while adding in a pair of helpers in the Phoenix’s 6-1 victory. This time, the third-year veteran would be named the game’s second star while his club cruised to their fourth straight win.

The second overall selection of the Phoenix at the 2017 QMJHL Draft, Poulin currently sits third in team scoring with 51 points in just 33 games. Chosen by the Pittsburgh Penguins in the first round, 21st overall, at the 2019 NHL Entry Draft, Poulin is the first player to be named Ultramar Player of the Week twice this season.