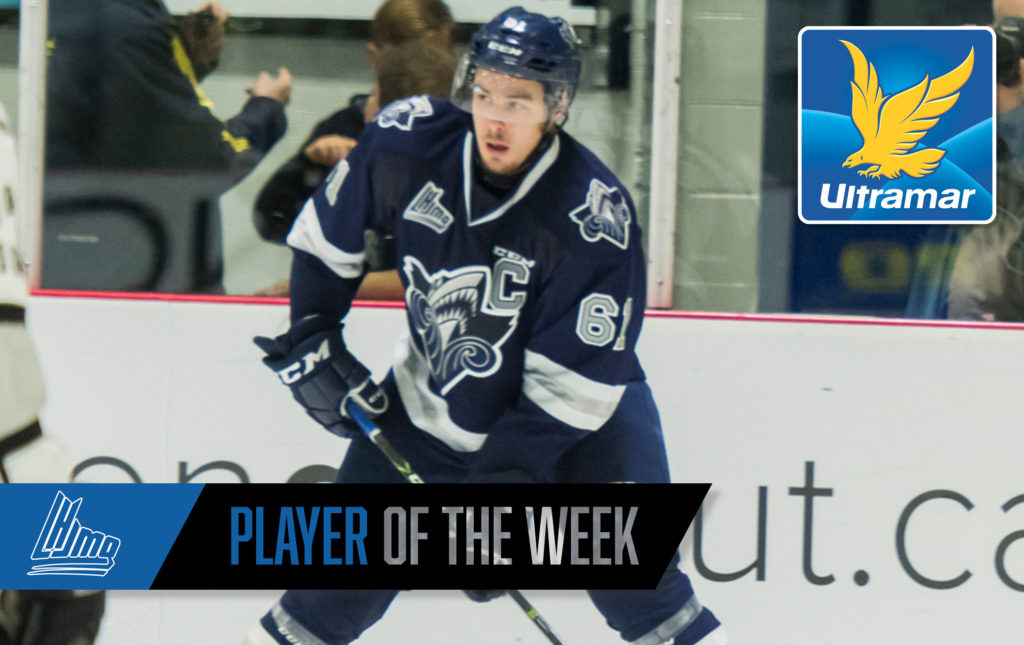 Boucherville, Que. – The Ultramar Player of the Week is Samuel Dove-McFalls (Océanic | Rimouski) whose brilliant offensive play helped him rack up five goals and three assists in just three games.

Dove-McFalls’ performance helped the Océanic win all three of their games last week, solidifying their division lead as well as putting them just three points shy of the league’s top spot.

On Wednesday, Dove-McFalls helped his team triumph over the western division leader, the Blainville-Boisbriand Armada, in a 3-2 shootout win, posting one goal and one assist in the process.

Showing no signs of slowing down, the 20-year-old forward netted a goal and two assists in an 8-6 win over the Shawinigan Cataractes on Saturday. For his great performance, he was awarded the first star of the game.

Just one day later, the Océanic took on the Saint John Sea Dogs and won 8-1 with Dove-McFalls scoring three goals. All while being named the second star of the game, the forward also obtained the first hat trick of his QMJHL career.

All in all, Dove-McFalls’ eight points in just three games as well as his +4 differential were decisive factors in the team’s capacity to obtain six points throughout the week, putting the team nine points ahead of the eastern division’s second place team.

Other players considered for the Ultramar Player of the Week are forward Otto Soompi (Mooseheads | Halifax) and goaltender Francis Leclerc (Drakkar | Baie-Comeau).

Soompi had a total of six assists in his three games played last week, as well as having a +7 differential. The 19-year-old forward started the week off by getting three assists as the Mooseheads won 6-3 against the Charlottetown Islanders. The next day, Soompi added another two assists while Halifax beat Charlottetown 3-2 in overtime. On Saturday, he closed out his week by assisting teammate Raphaël Lavoie’s overtime game-winning goal in a 4-3 win over the Moncton Wildcats. Soompi currently leads the league in assists with 37, as well as in the Plus/Minus category with his +31 ratio.

Leclerc, since being a part of the Drakkar, has won his two first games with his new team. He obtained a 3-0 shutout win over the Acadie-Bathurst Titan by stopping all 38 shots that came his way and earning the first star of the game. He followed up with a 5-3 win over the Cape Breton Screaming Eagles, stopping 31 out of 34 shots during the encounter. He ended the week with a 1.50 goals against average, as well as a .958% save percentage. Francis Leclerc goes into the next week looking for his 20th win of the season, posting a 19-5-2-0 record up to this point.