Cape Breton Eagles ultramar player of the week
by
Will MacLaren 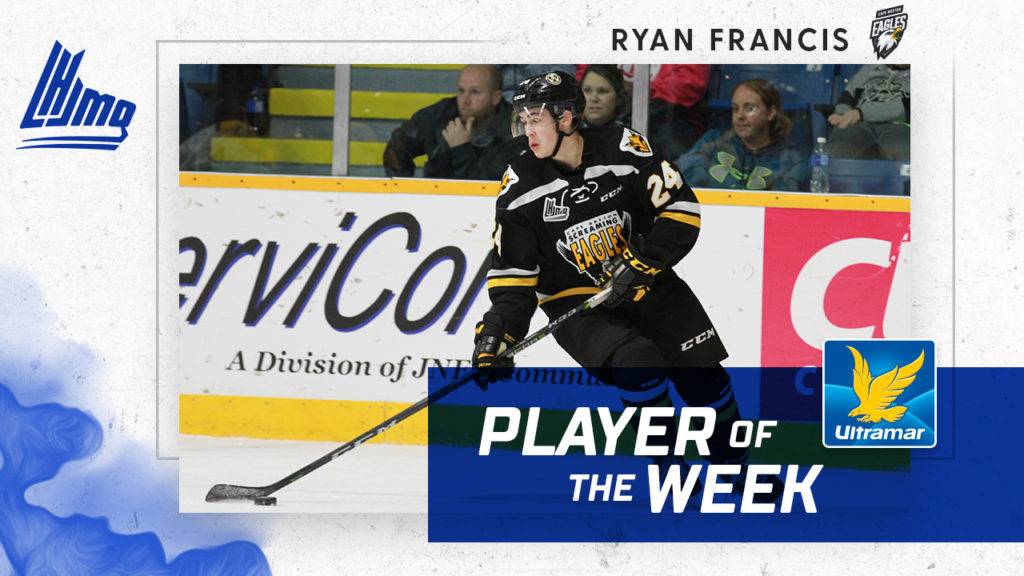 The most recent Ultramar Player of the Week is Cape Breton Eagles’ winger Ryan Francis. In three road games, the 17-year-old from Beaver Bank, Nova Scotia scored twice and added seven assists as the Eastern Conference leading Eagles went 2-1 on the week.

It was a tough start to the road swing on Wednesday night for Cape Breton as they would suffer their first setback of the season in a 9-2 loss to the Rimouski Océanic. Despite that setback, Francis registered an assist in the match.

Friday night in Baie-Comeau would be a different story for Francis and the Eagles. Cape Breton would bounce back to earn a 7-2 triumph over the Drakkar. The third-year forward scored once and added four assists, taking first star honors for the contest.

On Saturday afternoon in Chicoutimi, the Eagles would improve their record to 6-1 on the year by overcoming a two-goal first-period deficit and eventually beating the Saguéneens by a score of 6-3. Francis continued his offensive ways by scoring once and adding a pair of assists, including a helper on the game-winning tally.

Francis currently sits in a three-way tie for fifth in QMJHL scoring with 14 points in seven games. His 11 assists are good for a second-place tie overall in the circuit. A second-round pick of the Eagles at the 2017 QMJHL Draft, Francis is already closing in on his previous career-high of 34 points in a season, set during his rookie campaign in 2017-18.