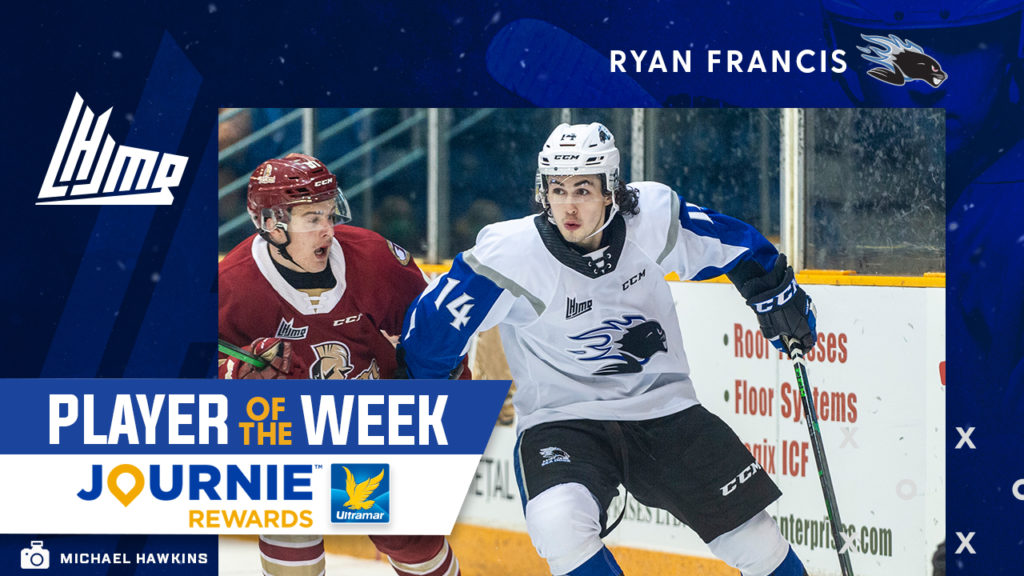 The latest Ultramar Player of the Week in the QMJHL is Saint John Sea Dogs center Ryan Francis. In three games, the 19-year-old from Beaver Bank, Nova Scotia scored four times and added four assists as the Dogs finally got the 2021 portion of their schedule underway by going 3-0-0-0.

On Tuesday night in Bathurst, Francis, acquired from the Cape Breton Eagles in January, made sure his Sea Dogs debut was worth the wait. His second period natural hat trick erased Saint John’s two-goal deficit while his fourth goal of the night sealed the deal in a 5-3 Dogs win over the Acadie-Bathurst Titan. For Francis, it was his first career four-goal game in the “Q” and made him an easy choice for first star of the night.

On Saturday evening in Moncton, Francis would chip in with a pair of assists, including a helper on the opening goal of the game, as the Dogs emerged from the back-and-forth contest with a 5-4 overtime triumph over the Wildcats. The fourth-year veteran also ended the game with a +2 rating while winning six of ten faceoffs.

Finally, on Sunday afternoon, Francis would produce another pair of assists, including a pass on the eventual insurance goal late in the third period, as the Sea Dogs made it three straight wins following a hiatus of more than three months with a 6-3 victory over the Titan. This extended Francis’ point streak to eight games, dating back to early November.

Francis is currently the highest scoring member of the Sea Dogs with 10 goals and 29 points in 18 games. A fifth-round selection of the Carolina Hurricanes at the 2020 NHL Entry Draft, Francis hasn’t missed a beat after accumulating 72 points in 61 games with the Eagles last season.