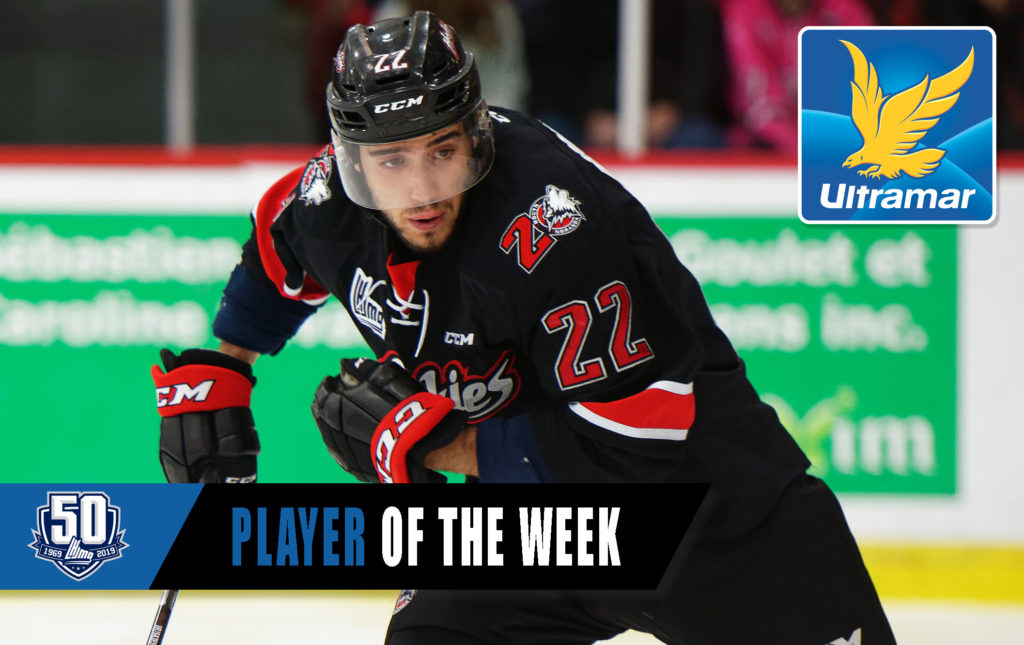 The latest Ultramar Player of the Week is Rouyn-Noranda Huskies center Peter Abbandonato. In three road games, the 20-year-old from Laval, Quebec scored once and dished out six assists as the Huskies went 3-0 to secure top spot in the league’s overall standings.

For Halloween on Wednesday night, Abbandonato was fully prepared to play tricks against the hometown Remparts. He would garner an assist on every goal scored in the game, a 3-0 Huskies victory over Quebec. Named the second star of the contest, Abbandonato was also a +2 for the match.

Moving on to Sherbrooke Friday night, the fourth year forward would score once and add an assist in regulation as the Huskies and Phoenix engaged in a back and forth affair. Not to be outdone, Abbandonato would also score in the shootout, helping lead his team to a 5-4 triumph. Once again, he was named the game’s second star.

Finally, on Saturday in Gatineau, Abbandonato would chip in a pair of assists in his club’s 4-3 win over the Olympiques. He would cap off the game – and a successful week overall – by assisting on the game-winning tally with under six minutes remaining in the third period. The Huskies’ Assistant Captain would also step up his game in the faceoff circle, winning seven of eleven draws on the night.

As a result of his recent offensive outburst, Abbandonato has vaulted into second place in the league scoring race with 32 points in 19 games. A second-round selection of the Huskies in the 2014 QMJHL Draft, Abbandonato was also invited to NHL training camp with the St. Louis Blues at the start of this season.