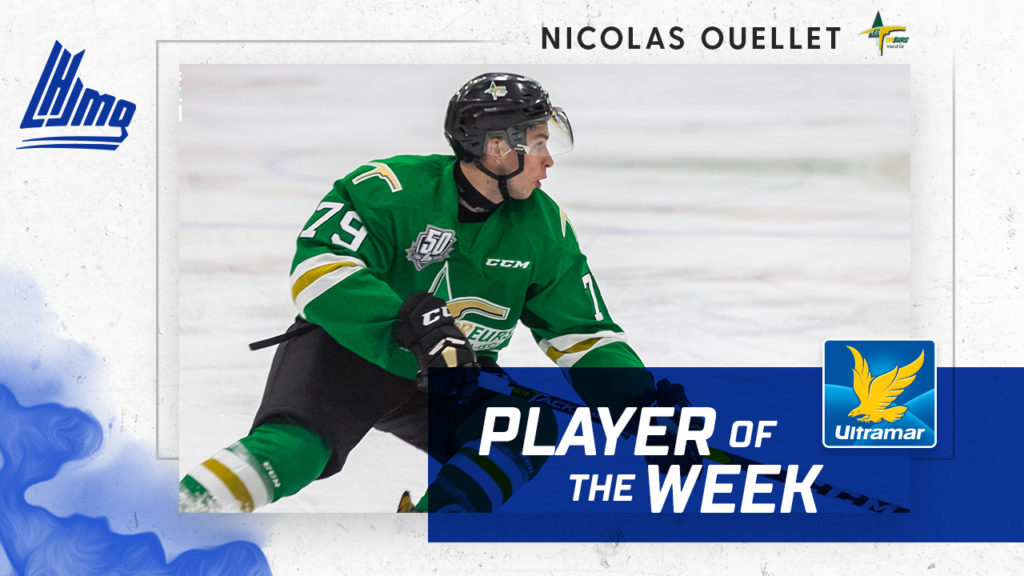 The latest Ultramar Player of the Week is Val-d’Or Foreurs winger Nicholas Ouellet. In three games, the 20-year-old from Mascouche, Quebec scored seven times and added one assist, helping the Foreurs extend their current win streak to five games and propel them to the top of the West Division standings.

On Tuesday night at home, Ouellet fired home his second career QMJHL hat trick – and first in almost three years – in the Foreurs’ 5-3 triumph over the Gatineau Olympiques. The fourth-year veteran, who also recorded a +2 rating over the course of the evening, was named the first star of the game.

He would be named the first star again on Friday night, recording his second consecutive three-goal game and adding a helper as the Foreurs dominated on home ice, downing the Acadie-Bathurst Titan 10-0. For Ouellet, it was his third straight multi-goal game.

Ouellet would cap his week off on Sunday afternoon in yet another home contest. His goal just 65 seconds into the game would open the scoring and help drive the Foreurs to a 4-1 victory over the Charlottetown Islanders. Val-d’Or’s fifth straight victory was good enough to pull them ahead of Rouyn-Noranda for the division lead and take second place in the Western Conference.

Ouellet, selected in the ninth round of the QMJHL Draft by Val-d’Or back in 2015, currently leads the squad with 12 goals and 18 points in 15 games. He is on pace to shatter his previous single season high of 22 tallies, which he achieved in 55 games during the 2018-19 campaign.