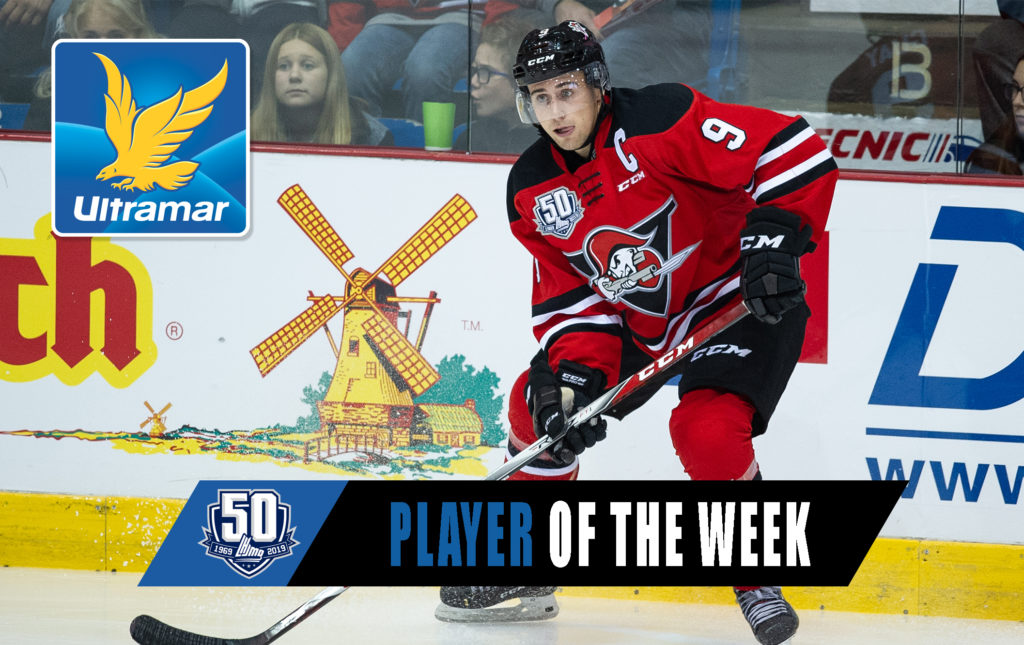 The latest Ultramar Player of the Week is Drummondville Voltigeurs center Nicolas Guay. In a trio of home games, the 19-year-old from Sherbrooke, Quebec scored 6 times and added a pair of assists as the Voltigeurs went undefeated to maintain top spot in the Central Division standings.

On Wednesday night, the Voltigeurs captain, with fellow forwards Maxime Comtois and Joseph Veleno away at Team Canada’s Selection Camp in advance of the upcoming World Junior Hockey Championship, scored his 16thgoal of the season, won 8 of 12 faceoffs and was a +2 in his team’s 6-4 triumph over the league-leading Rouyn-Noranda Huskies.

On Friday night, Guay doubled his production from the previous match, scoring twice and registering a +4 rating as the Voltigeurs defeated the Val-d’Or Foreurs by a score of 7-1. For his efforts, Guay was named the game’s third star.

The fourth-year veteran saved the best for last on Saturday afternoon, treating the Drummondville crowd to an early Christmas present in the team’s 6-4 victory over the Gatineau Olympiques. Guay would finish the contest with a hat trick and two assists, making him an easy choice for the first star of the game as the Voltigeurs won their fifth in a row.

Originally a second-round selection of the Chicoutimi Sagueneens in the 2014 QMJHL entry draft, Guay is currently in his third campaign with the Voltigeurs. Entering the league’s holiday break, he sits third on the Voltigeurs in scoring with 41 points, including 21 goals, in 32 games this season. Guay was an invite to NHL training camp with the Detroit Red Wings at the beginning of this season.