player of the week tigres comtois
by
LHJMQ/QMJHL 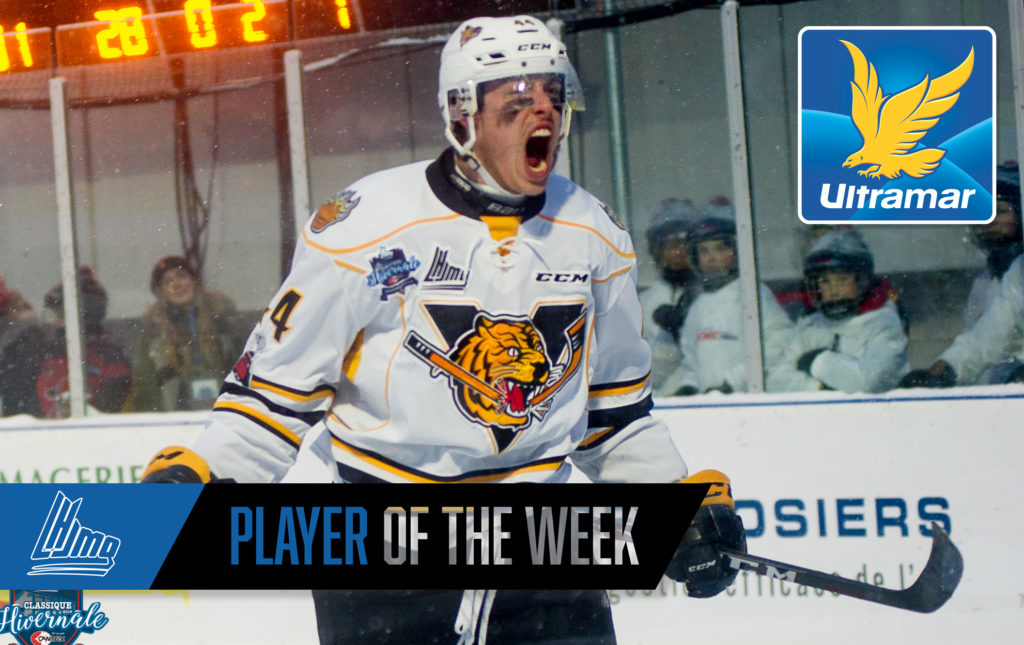 Boucherville, Que. – The Ultramar Player of the Week is Maxime Comtois (Tigres | Victoriaville) who managed to accumulate eight points in three games over the course of the past week. His strong performance has helped his team win its last five games, placing the Tigres seventh in the overall standings and officially clinching them a spot in the playoffs.

With a differential of +6 and an outstanding 2.67 average points per game for the week, Comtois has shown why he is deserving of this week’s title.

On Wednesday, Comtois got his week started against the Val-d’Or Foreurs by scoring a goal and obtaining an assist in his team’s impressive 7-1 victory.

The next day, the 19-year-old forward had an exceptional game with four points on the night, including two goals. While also adding four body checks to show off a versatile style of play, Comtois helped the Tigres top the Baie-Comeau Drakkar 8-4.

On Saturday, Comtois took part in the 2018 Drummondville Winter Classic against the Voltigeurs.

He scored a goal and got an assist, extending his current point streak to seven consecutive games. All while scoring his 30th of the season, his team took a 2-0 victory to close out the week.

The forward currently has totals of 30 goals and 24 assists in just 41 regular season games. If he continues with the same momentum for the remainder of the season, he should surpass his QMJHL high for points, which is currently set at 60.

Other players considered for the Ultramar Player of the Week are forwards Alexandre Alain (Armada | Blainville-Boisbriand) and Filip Zadina (Mooseheads | Halifax).

Alain had two goals and five assists giving him a total of seven points for the week, not to mention that three of those five assists were on game-winning goals. He’s currently on a nine-game stretch with at least one point, while also being on a four-game streak with two points or more. The Armada has not lost a game in regulation dating back to January 7th.

As for Zadina, he posted a total of eight points in four games last week. He had two assists and an amazing six goals, four of which were scored in the same game against Charlottetown, on Tuesday. He is currently fourth overall in the league for goals with 35, as well as being first among rookies. He currently sits at a total of 63 points, tied for first among rookies with Alexis Lafrenière (Océanic | Rimouski).