Mavrik Bourque Shawinigan Cataractes player of the week
by
LHJMQ/QMJHL 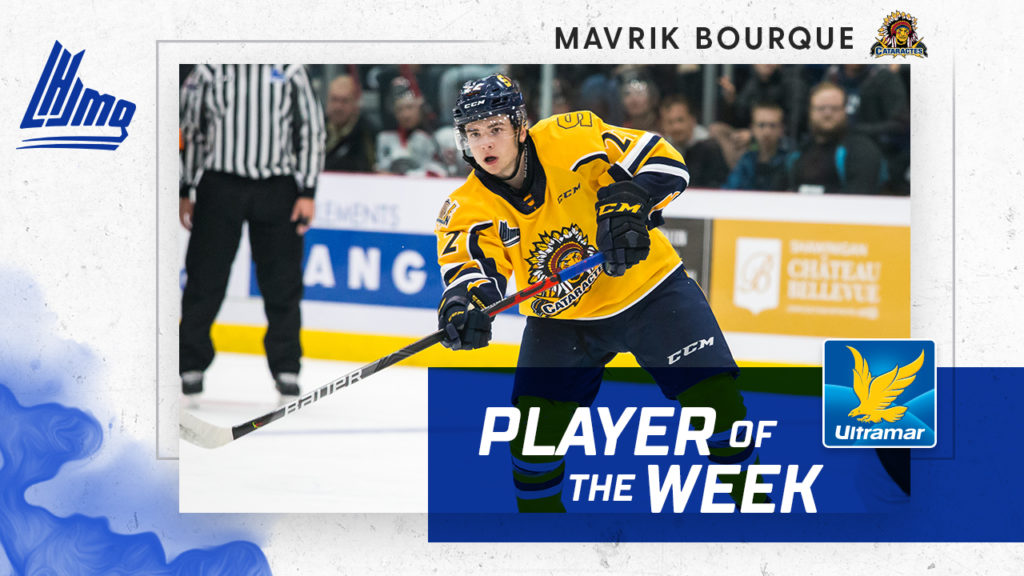 The latest Ultramar Player of the Week in Shawinigan Cataractes center Mavrik Bourque. In three games, the 17-year-old from Plessisville, Quebec scored four times and added five assists while the Cataractes went 2-1 on the week.

On Tuesday night at home, Bourque scored once, added four assists and was named the game’s second star as the Cataractes outlasted the Saint John Sea Dogs 8-5. For the second-year forward, it was his first career five-point game in the QMJHL.

On Friday night, once more at home, Bourque scored once and added an assist in his club’s 6-3 triumph over the Cape Breton Eagles. This time, Bourque would be named the game’s first star, recording a +/- rating of +2 and winning eight of the nine faceoffs he took.

Finally, on Sunday afternoon in Rimouski, the Oceanic handed the Cataractes a 6-4 setback in yet another back-and-forth offensive slugfest. Despite the loss, Bourque scored twice, running his current point streak to ten straight games. It was also his seventh consecutive game with at least one goal.

Bourque currently leads the Cataractes with 33 points in 21 games. His 17 goals place him third overall in the QMJHL in that category. The third overall selection of the 2018 QMJHL Draft, Bourque has been listed as a “B” level prospect (projected second or third round selection) for the 2020 NHL Entry Draft.