player of the week Charlottetown Islanders matthew welsh
by
LHJMQ/QMJHL 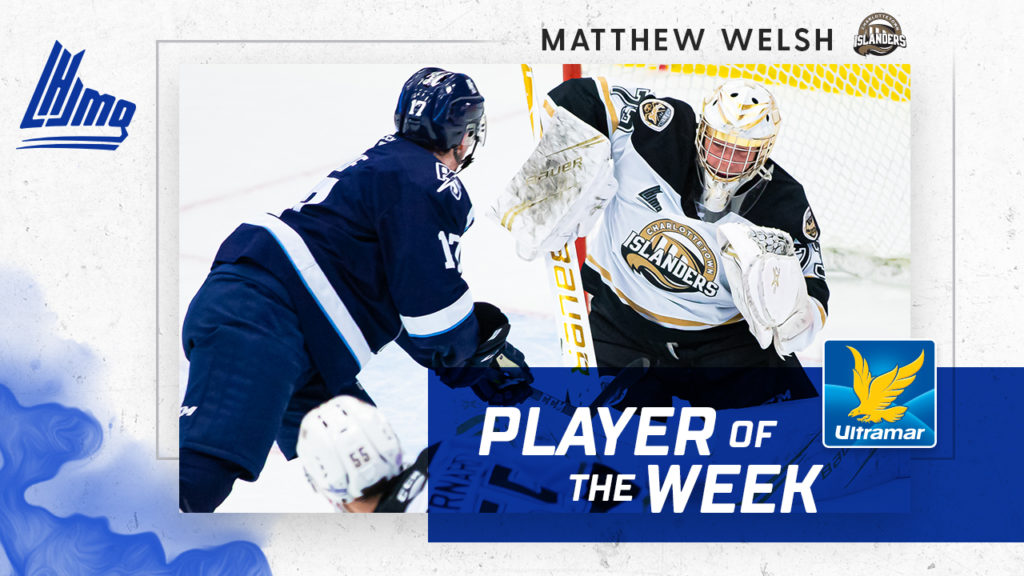 The final Ultramar Player of the Week prior to the holiday break is Charlottetown Islanders goaltender Matthew Welsh. In a pair of starts last week, the 20-year-old from Halifax, Nova Scotia went 2-0 with a 0.96 GAA, .968% save percentage and one shutout.

On Friday night in Halifax, Welsh provided a lasting memory by playing his 200th career QMJHL game in his hometown. By the time the night was over, he had kicked aside 21 shots in a 5-0 Islanders victory over the Mooseheads. For Welsh, who was named the game’s first star, it was his second shutout of the campaign and the 13th of his career, placing him in a tie for seventh all-time in league history in that department.

The following afternoon at home, the fifth-year netminder sent the Islanders faithful home for the holidays on a happy note. Welsh’s 39-save performance was a difference maker in his squad’s 3-2 overtime triumph over the Cape Breton Eagles. Once again, he earned first star honors for the contest.

Welsh is the 14th netminder in QMJHL history to appear in at least 200 games over the course of his career. A second-round selection of the Islanders in the 2015 QMJHL Draft, he sports a 16-11 record on the year as well as a career-low 2.62 GAA entering the break. Welsh was invited to NHL training camp with the Buffalo Sabres earlier this season.