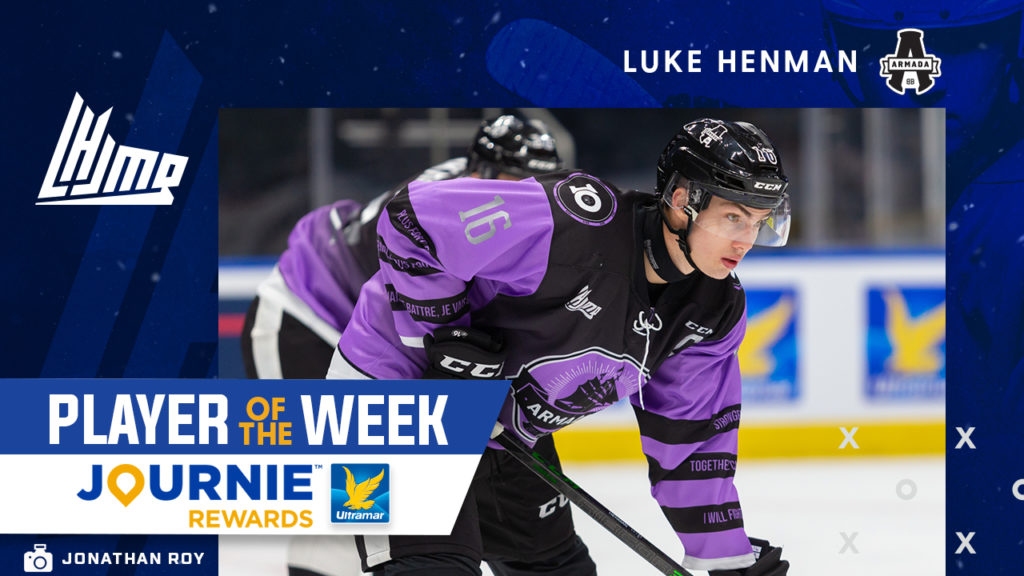 This week’s Ultramar Player of the Week is Blainville-Boisbriand Armada center Luke Henman. In four games, the 20-year-old form Halifax, Nova Scotia scored four goals and added six assists to help propel the Armada to a 4-0-0-0 record during the club’s first week in the protected environment event at Quebec’s Videotron Center.

On Tuesday afternoon, Henman kicked his week off with a second period assist and three faceoff wins in five attempts as the Armada downed the Victoriaville Tigres 5-1 in its first regular season game since October 2nd.

On Thursday evening, the Armada captain would assist on his club’s first two goals. He would then add to the festivities by potting his first goal of the campaign with just under four minutes remaining in the third period to force overtime in a contest eventually won in the extra session by the Armada by a score of 4-3 over the Quebec Remparts. Henman would also complete the evening with a +/- rating of +3.

Saturday night saw Henman post a four-point outing in an 5-4 Armada triumph over the Shawinigan Cataractes. This time, he would add to his impressive week by finding the back of the net for the game-winner midway through the third frame, his second goal of the contest. Henman would skate away with first star honors following the game.

The fourth-year veteran would cap off the week for the still-unbeaten Armada on Sunday evening by opening the scoring with his 50th career regular season goal in the “Q”. He would go on to add an assist on a second period insurance marker as his squad improved to 6-0-0-0 on the season following a 4-1 victory over the Drummondville Voltigeurs.

Henman currently leads the Armada with 14 points in six games. A fourth-round selection of the Carolina Hurricanes at the 2018 NHL Entry Draft, Henman’s next regular season game will be his 200th in the QMJHL.