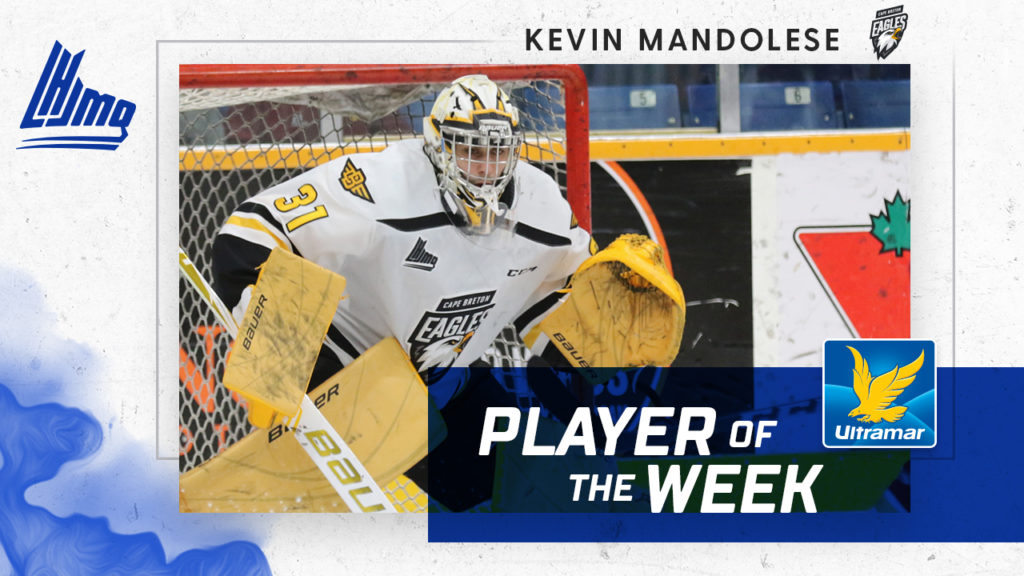 The initial Ultramar Player of the Week for 2020 is Cape Breton Eagles goaltender Kevin Mandolese. In three home games, the 19-year-old native of Blainville, Quebec went a perfect 3-0 with a GAA of 0.97, a .968% save percentage and a pair of shutouts to help the Eagles remain in the hunt for top seed of the Maritimes Division.

On Tuesday afternoon, Mandolese gave the New Year’s Eve crowd reason to celebrate early by steering aside all 32 shots he faced in a 4-0 victory over the Charlottetown Islanders. For the fourth-year veteran, who was named the game’s second star, it was his first shutout of the campaign.

On Friday night, Mandolese survived a furious third-period barrage by the Acadie-Bathurst Titan before emerging on the right side of a 4-3 shootout decision. In earning his 12th win of the season, Mandolese stopped 27 shots in regulation and overtime as well as all three shooters in the shootout.

It would not take long for Mandolese to register his second shutout of the year. That would take place on Saturday night when he made 31 saves in a 5-0 triumph over the Moncton Wildcats. On this occasion, he would be named the game’s first star while running his personal win streak to five games. Meanwhile, the Eagles made it six games with at least one point earned.

Mandolese, who was also named Goaltender of the Month for December last week, sports a 13-6-0-0 record this season. His 2.38 GAA and .919% save percentage, both career bests, place him second in the QMJHL in both categories. The thirteenth overall choice by Cape Breton at the 2016 QMJHL Draft, Mandolese was a sixth-round selection of the Ottawa Senators at the 2018 NHL Entry Draft.