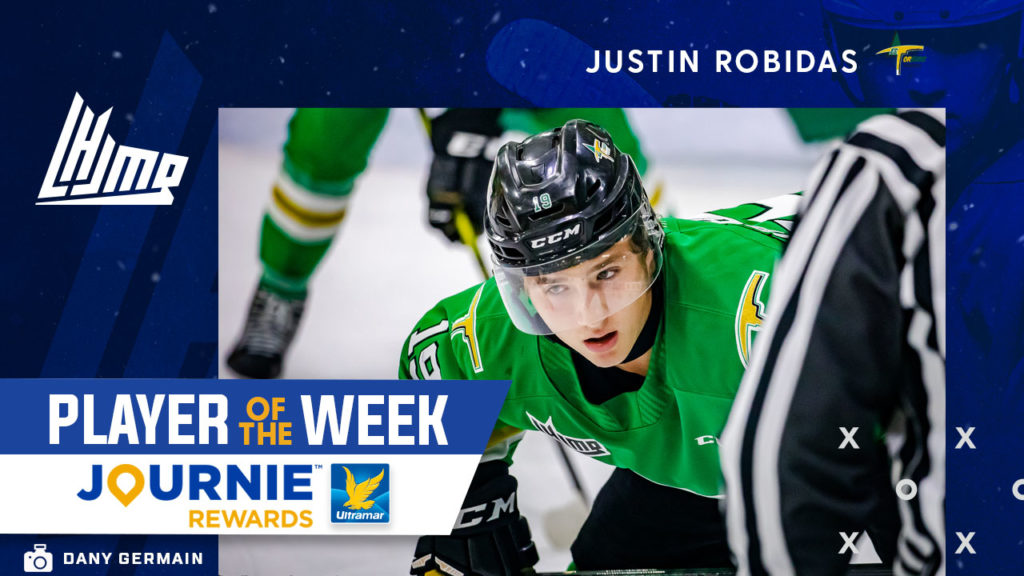 The latest Ultramar Player of the Week is Justin Robidas of the Val-d’Or Foreurs. The 17-year-old center, originally from Plano, Texas, scored four goals and added four assists while the Foreurs went 3-0-0-0 at home versus the Rimouski Oceanic.

On Thursday night, Robidas’ fifth goal of the season, a powerplay marker, scored just over five minutes into the second period would prove to be the game winner. He would go on to add some insurance with an empty netter late in the third frame of Val-d’Or’s 4-2 triumph over the Oceanic. That performance earned Robidas second star honors for the contest.

On Friday night, the second year forward would go one step further, opening the scoring 3:57 into the first, then assisting on three more tallies as the Foreurs went on to beat Rimouski 6-1. This time, Robidas would be named the game’s first star for his first four-point outing of the campaign.

Robidas would again be named second star for Sunday afternoon’s contest by securing his second game-winning goal of the week, and league-leading fourth overall, while adding still another assist in Val-d’Or’s 5-1 victory over the Oceanic. That made it eleven straight games with at least one point for the West Division’s top team.

The second overall selection at the 2019 QMJHL Draft, Robidas has recorded points in 13 of 15 games so far this year and leads the Foreurs in scoring. With 20 points up to this point this season, he’s well on his way to smashing his rookie total of 43 points.