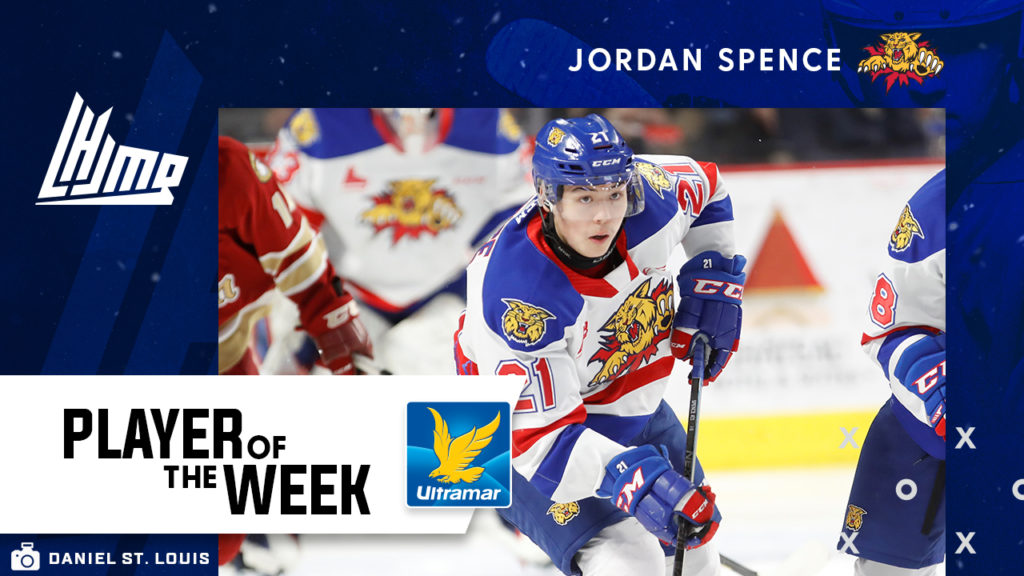 The latest Ultramar Player of the Week honors go to Moncton Wildcats defenseman Jordan Spence. In two games, the 19-year-old from Cornwall, PEI scored three goals and added two assists in a pair of overtime victories for the Wildcats.

On Thursday night in Halifax, Spence assisted on both the opening and closing goals of the game – the latter a Gabriel Fortier marker at the 22-second mark of overtime, to help the Wildcats earn a 4-3 come-from-behind victory over the Mooseheads. Spence would also record a +1 rating for the contest.

The following night in Bathurst would prove to be a special one for the third-year veteran. Spence became just the sixth defenseman in Wildcats franchise history – and the first in nine years – to record a hat trick as his club defeated the Titan 7-6. His third goal was also the game-winner as it came 1:51 into the extra frame, earning the Wildcats back-to-back wins for the first time this season and earning Spence the game’s first star.

Spence was named QMJHL Rookie of the Year in 2018-19. Not to be outdone, he went on to capture the Emile-Bouchard Trophy as the league’s top defenseman last season. A fourth-round selection of the Los Angeles Kings at the 2019 NHL Entry Draft, Spence’s recent scoring spree has doubled his offensive production on the young season to nine points in seven games.