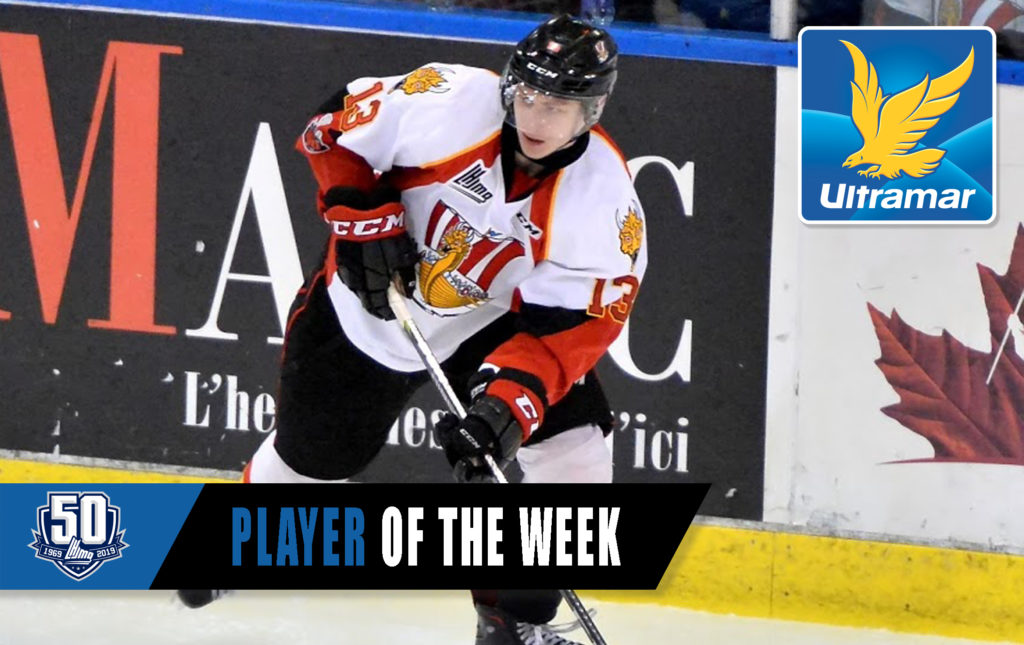 The latest Ultramar Player of the Week is no stranger to the accolade. For the second time this season, the award goes to Baie-Comeau Drakkar left winger Ivan Chekhovich. In three games last week, the 19-year-old from Yekaterinburg, Russia scored five goals and added three assists.

On Wednesday night in Quebec, Chekhovich recorded his second three-goal and five-point game of the season in a 6-5 shootout victory over the Remparts. The third-year veteran was a factor in every goal scored in regulation by the Drakkar in this see-saw battle, including an assist on a Gabriel Fortier tally with just over a minute remaining in regulation that forced extra time. For Chekhovich, who was named the game’s first star, it was his third career hat trick and five-point game in the QMJHL.

On Friday night in Chicoutimi, Chekhovich would spin, fire and find the back of the net from a sharp angle to open the scoring at the 14:21 mark of the first period in an eventual 4-3 shootout win for the Drakkar over the Sagueneens, the first of two games between the East Division foes as part of Rivalry Weekend in the QMJHL.

The scene shifted to Baie-Comeau on Saturday afternoon. Once again, Chekhovich opened the scoring in the contest, converting just over seven minutes into the first period. He would add an assist on the eventual game winning goal later in the frame and be named the game’s third star as the Drakkar defeated the Sagueneens 4-1 to complete a sweep in the Rivalry Weekend series. The win also vaulted the Drakkar into first place overall in the QMJHL standings.

Through 16 games this year, Chekhovich has posted 10 goals and 24 points, placing him in a tie for fifth overall in the league in each of those categories. A seventh-round selection of the San Jose Sharks in the 2017 NHL Draft, Chekhovich has been held off the scoresheet just twice so far this season.