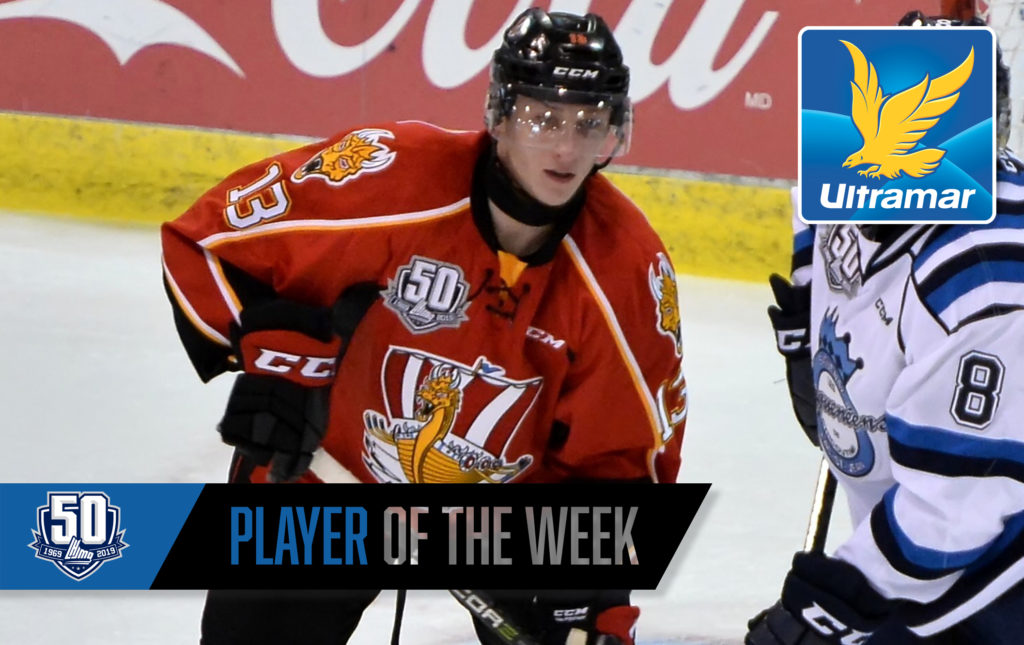 For the third time this season, Baie-Comeau Drakkar winger Ivan Chekhovich has captured the Ultramar Player of the Week honors. In three games, the 19-year-old from Yekaterinburg, Russia scored six goals and added three assists as the Drakkar went undefeated.

On Tuesday night at home, Chekhovich scored twice, including a crucial tally with 29 seconds remaining in the first period, and added an assist in Baie-Comeau’s 8-3 victory over the Chicoutimi Saguenéens. For his efforts, the crafty forward was awarded the third star of the game.

Back at home on Friday night, Chekhovich was the game’s first star in the Drakkar’s 7-1 win over the Victoriaville Tigres. Tied at one after 40 minutes of play, Baie-Comeau would reel off six goals in the final frame, highlighted by Chekhovich’s fifth hat trick of the season! In addition to those three goals, he would also chip in an assist during the contest.

The following afternoon, the Tigres and Drakkar would lock horns once more in Baie-Comeau. This time, Chekhovich would contribute his league leading 29th goal on the season and add another assist in his team’s 5-2 triumph, a win that would vault them into a tie for second overall in the QMJHL standings. Once again, Chekhovich was named the game’s first star.

A selection of the San Jose Sharks in the 2017 NHL Entry Draft, Chekhovich sits in a four-way tie for second in the QMJHL scoring race with 54 points in 32 games. He now makes his way to Moscow and the selection camp of Team Russia as they get set to compete at the 2019 IIHF World Junior Hockey Championship later this month in Vancouver and Victoria, BC.