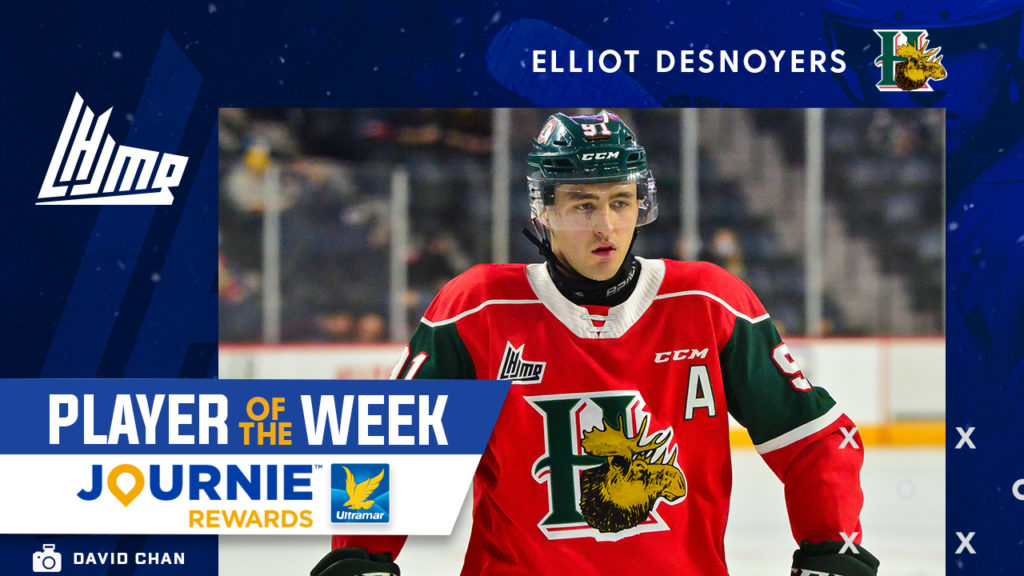 For the second time in three weeks, Ultramar Player of the Week honors have been earned by Halifax Mooseheads center Elliot Desnoyers. In a pair of home games, the 18-year-old from Saint-Hyacinthe, Quebec scored five times and added a pair of assists as the Mooseheads went 2-0 over the weekend.

In Halifax’s 5-4 triumph over the Charlottetown Islanders on Friday night, the third-year veteran went on a tear, scoring four times, including the game winner with just 36 seconds remaining. It was Desnoyers’ second four-goal game of the young campaign and made him just the second player in franchise history to score four in one contest twice in the same season (Jason King, 2001-02). Needless to say, Desnoyers was named first star of the game.

On Saturday night, Desnoyers potted his first career shorthanded tally, added two assists for his sixth multi-point game of the campaign and finished with a +/- rating of +2 on the evening as the Mooseheads took down the Saint John Sea Dogs 5-4 in overtime. Once again, he would be named the game’s first star while the Moose posted back-to-back victories for the first time this season.

Desnoyers, a fifth-round selection of the Philadelphia Flyers at the 2020 NHL Entry Draft, has hit the ground running in Halifax after being dealt by the Moncton Wildcats during the off-season. His latest scoring spree finds him ranked second in the league with 11 goals and third in points with 20.