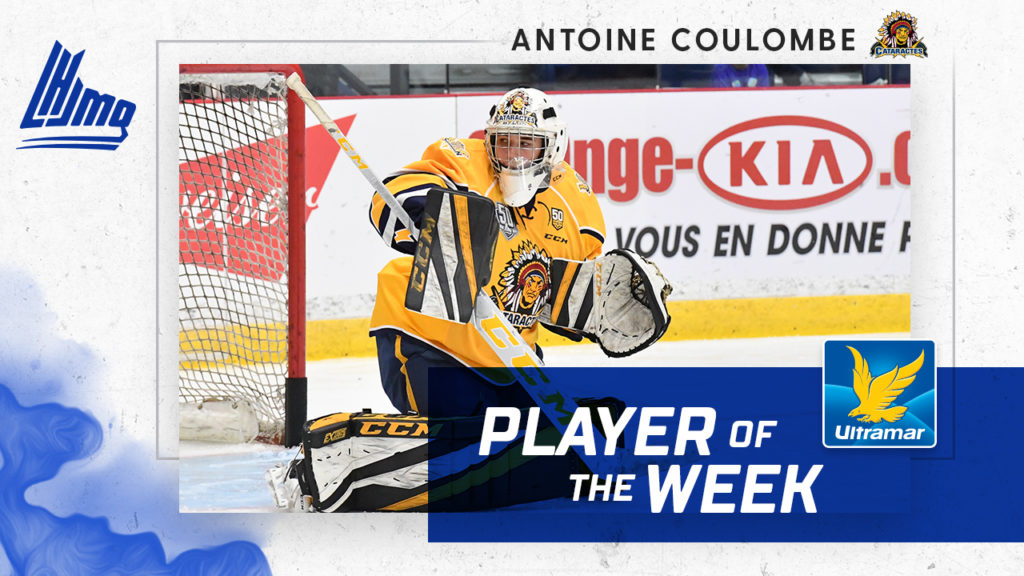 Boucherville, QC – The latest Ultramar Player of the Week is Shawinigan Cataractes goaltender Antoine Coulombe. In a pair of games, the 17-year-old from Montmagny, Quebec continued his phenomenal start to the 2019-20 campaign by going 2-0 while also posting his second shutout of the young season.

On Friday night, the Cataractes celebrated their 51st home opener in fine style, defeating the Victoriaville Tigres 5-0. Coulombe steered aside 30 shots to post his second consecutive shutout to start the season, while also being named the game’s second star.

The following afternoon, once again at home, the second-year netminder continued his impressive play by earning first star honors and making 33 saves in a 2-1 win over the Val-d’Or Foreurs. Alexandre Couture’s goal for Val-d’Or would end Coulombe’s streak of perfection at 191 minutes and one second.

Coulombe’s performance was a record breaking one. His 191:01 shutout streak is the longest in QMJHL history to kick off a regular season. It also represents the ninth longest shutout span in league history.

Coulombe now owns a perfect 3-0 record to start the season, with a microscopic 0.30 GAA and a save percentage of .989%. A second round selection of the Cataractes in the 2018 QMJHL Draft, Coulombe is eligible for selection at the 2020 NHL Entry Draft.