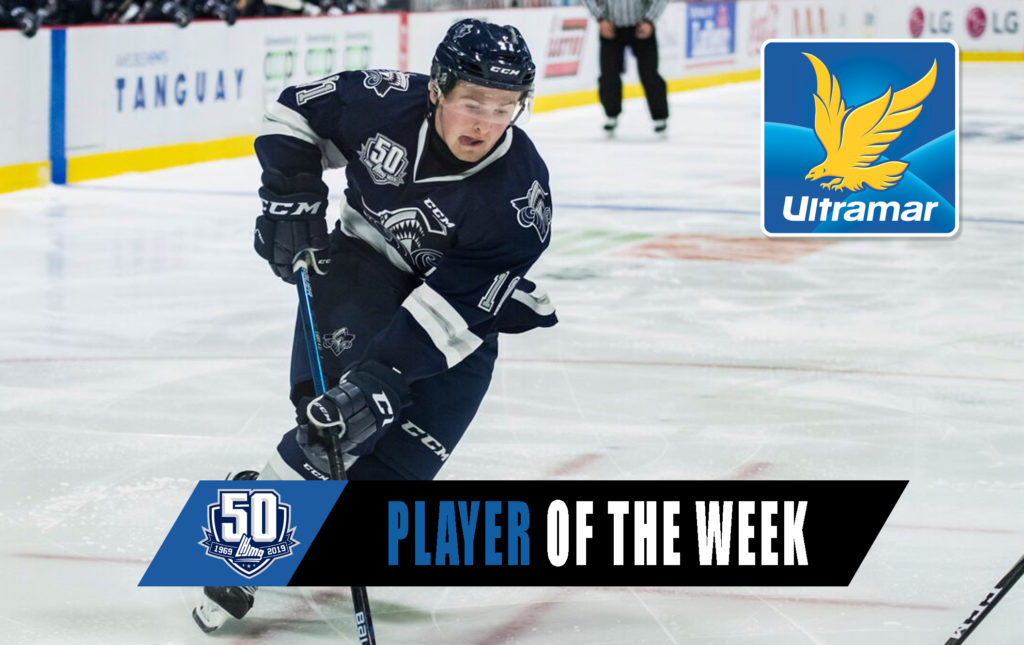 The latest player to earn Ultramar Player of the Week honors is Rimouski Oceanic winger Alexis Lafrenière. Playing a difficult stretch of four road games in five days, the 17-year-old from St. Eustache, Quebec rose to the challenge, scoring five times and adding a pair of assists as the Oceanic went 4-0 on the week, propelling themselves into the top five of the QMJHL’s overall standings.

On Wednesday night in Victoriaville, Lafrenière potted his 20th goal of the season, added an assist and was a +3 on the night as the Oceanic defeated the Tigres by a score of 6-2. For his efforts, the second year forward was named the second star of the contest.

On Friday night, Lafrenière scored twice, including the game winner, added an assist and once again recorded a +3 rating as Rimouski earned a 5-2 triumph over the Blainville-Boisbriand Armada. Again, Lafrenière was recognized for another strong showing, this time skating away as the game’s first star.

On Saturday night in Gatineau, the Oceanic prepared to do battle against the Olympiques for what would be the first of back-to-back encounters between the two clubs at the Robert Guertin Arena. On this evening, Lafrenière would open the scoring just under six minutes into the game, helping lead Rimouski to a 4-1 win over the Olympiques.

Playing in his 100th regular season QMJHL game on Sunday afternoon, Lafrenière would put an exclamation mark on the week for both himself and his club. Held off the scoresheet throughout regulation in what would prove to be a see-saw affair, Lafrenière would finally find the back of the net at the 2:18 mark of overtime, his second game-winning tally on the week, lifting the Oceanic to a 5-4 decision over the Olympiques.

Lafrenière currently sits fifth in league scoring with 67 points in 40 games. Included in that total are 43 assists, leaving him tied for second place in the QMJHL in that department. One of the top ranked prospects for the 2020 NHL Entry Draft, Lafrenière was one of five QMJHL players to represent Team Canada at the recently completed 2019 IIHF World Junior Hockey Championship in Vancouver and Victoria, British Columbia.