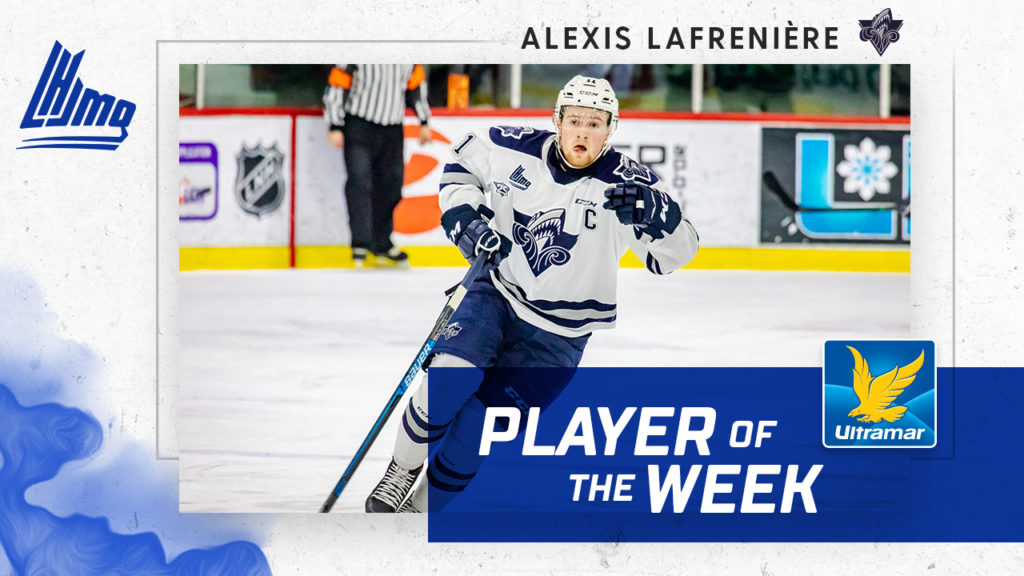 The latest Ultramar Player of the Week honors go to Rimouski Oceanic winger Alexis Lafrenière. In four road games, the 18-year-old from Saint-Eustache, Quebec scored seven times and added four assists as the Oceanic went 2-1-1 on the week.

The Oceanic’s odyssey through Western Quebec started on Wednesday night in Rouyn-Noranda. On that night, Lafrenière would pull the trigger on the game-winning tally just over four minutes into the second period, leading his club to a 2-1 victory over the Huskies. He would earn the game’s second star in the process.

On Friday night, it was off to Val-d’Or for a game that had a remarkably different feel. Lafrenière would offer up a hat trick and two assists – his second five-point effort of the season – as the Oceanic came out on top in an offensive slugfest, 10-8 over the Foreurs. This time, the third-year veteran would be named the game’s first star.

Back in Rouyn-Noranda on Saturday night, it was another high-scoring affair and another productive night for the Rimouski captain. Though his club fell 7-6 in overtime to the Huskies, Lafrenière led the charge with two goals and two assists.

Wrapping things up back in Val-d’Or on Sunday afternoon, Lafrenière opened the scoring with his 24th goal of the season. Although the Oceanic would end up on the wrong end of a 4-1 decision, the forward’s goal extended his point streak to 13 games. This is Lafrenière’s second point streak of 10 games or more this season.

A projected top pick in the 2020 NHL entry draft, Lafrenière holds a firm lead in the QMJHL scoring race with 70 points in 32 games. He also leads the circuit in assists and powerplay assists. Lafrenière’s next stop is in Oakville, Ontario where the selection camp for Team Canada in advance of the 2020 IIHF World Junior Hockey Championship will be held. He enters camp as one of three returning players from last year’s squad.