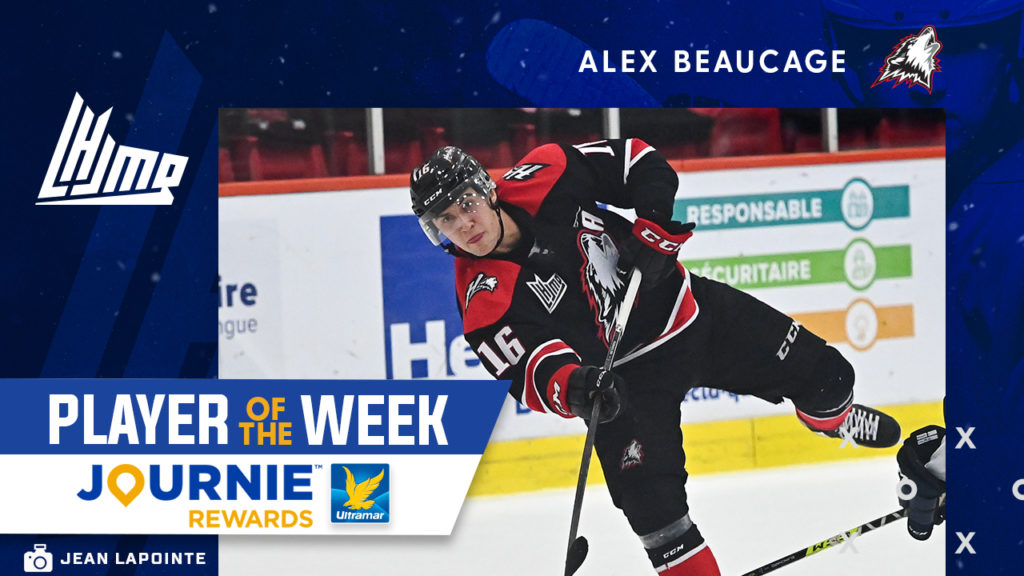 The latest Ultramar Player of the Week in the QMJHL is Rouyn-Noranda Huskies winger Alex Beaucage. In a pair of games, the 19-year-old from Trois-Rivieres, Quebec scored five times and added an assist while the Huskies earned three of a possible four points on the weekend.

On Friday night in Val-d’Or, Beaucage scored once and added a helper for his fifth multi-point outing of the season so far. Though the Huskies would eventually fall to the Foreurs in overtime by a score of 5-4, it nonetheless marked the fourth straight game in which Rouyn-Noranda earned at least a point in the standings.

The Huskies’ Assistant Captain would personally ensure that his club earned two points over its Abitibi rivals the following afternoon in Rouyn-Noranda. Trailing 4-1 to the Foreurs with under six and a half minutes remaining in the game, Beaucage took over.

He first recorded a natural hat trick to tie the game at 4-4, before burying the game-winner 3:03 into overtime. It was his first career four-goal performance in the “Q”, the first such game by a Huskies player since Timo Meier accomplished the feat during the 2016 playoffs and, not surprisingly, earned Beaucage the first star of the game.

The fourth-year veteran currently leads the Huskies with 19 points and sits second in the league with 13 goals through ten games. A third-round selection of the Colorado Avalanche at the 2019 NHL Entry Draft, Beaucage has been held off the scoresheet just once to this point in the season.